Vehicles > Suzuki > In The Pink 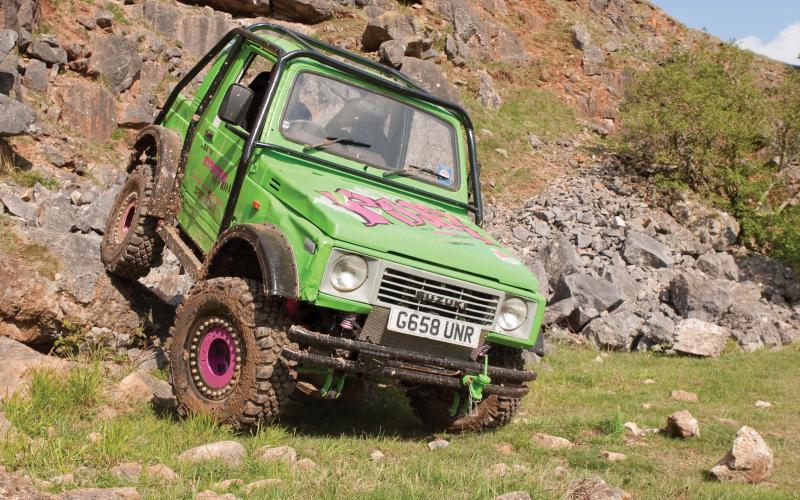 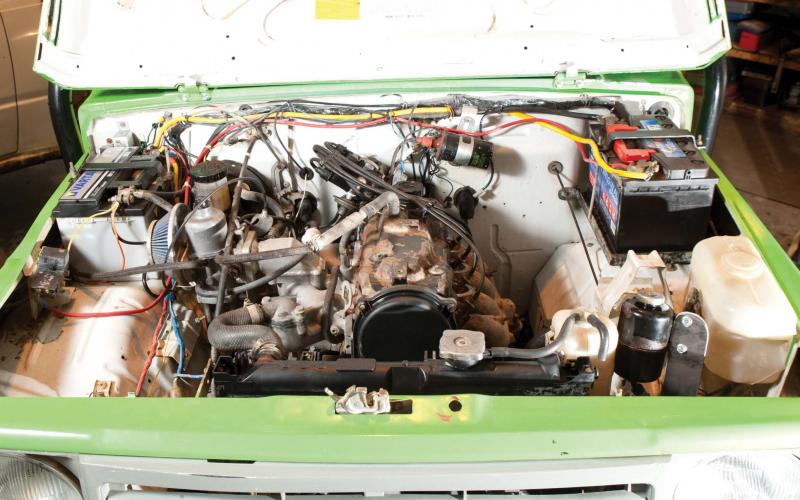 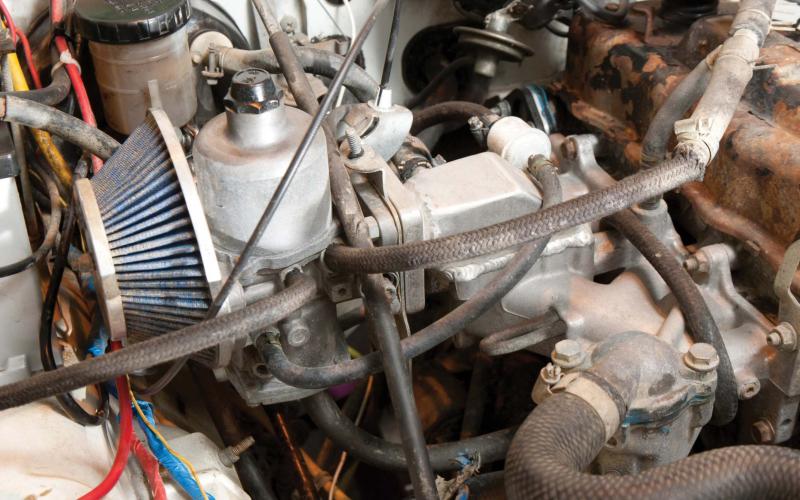 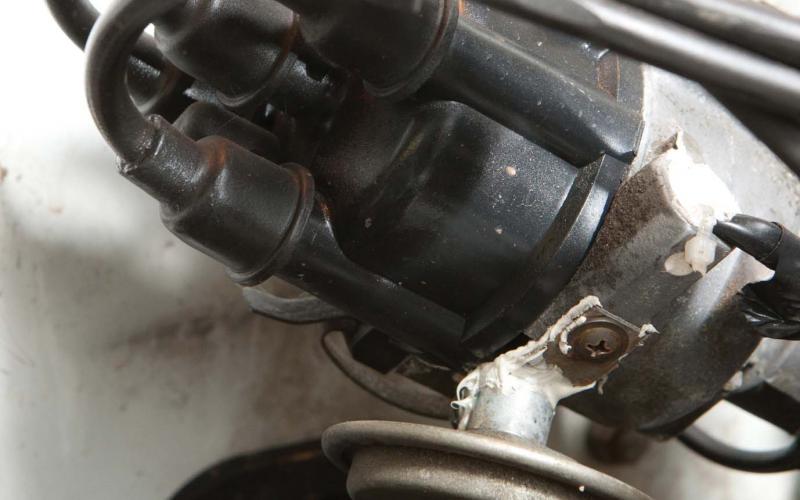 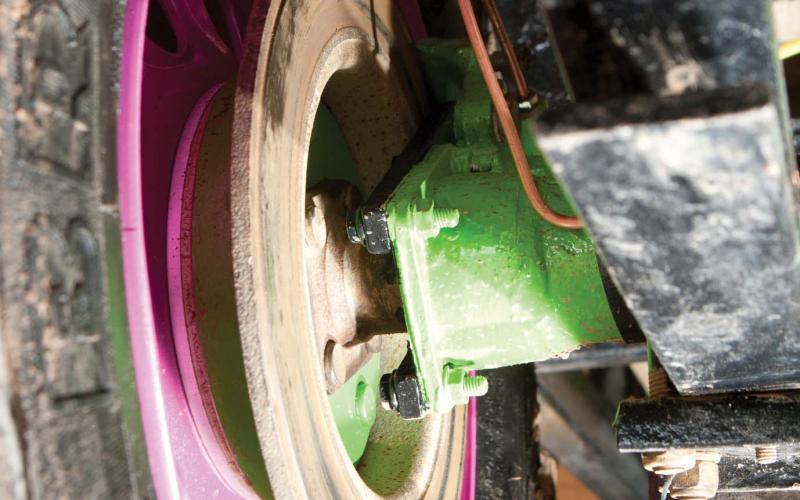 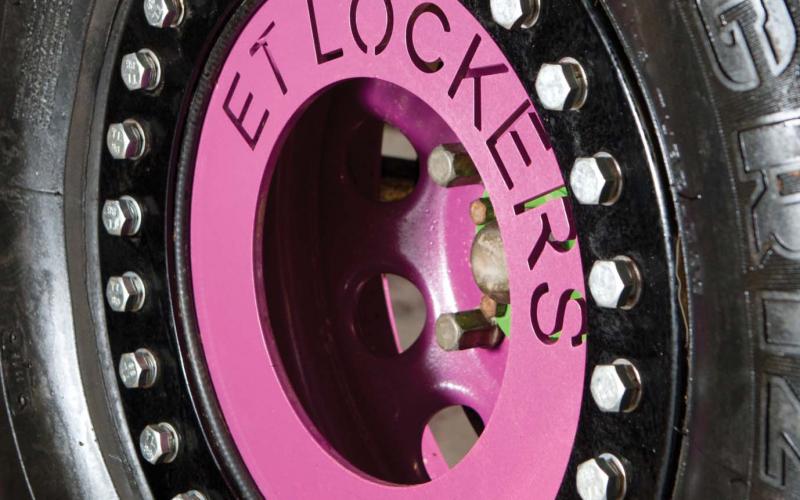 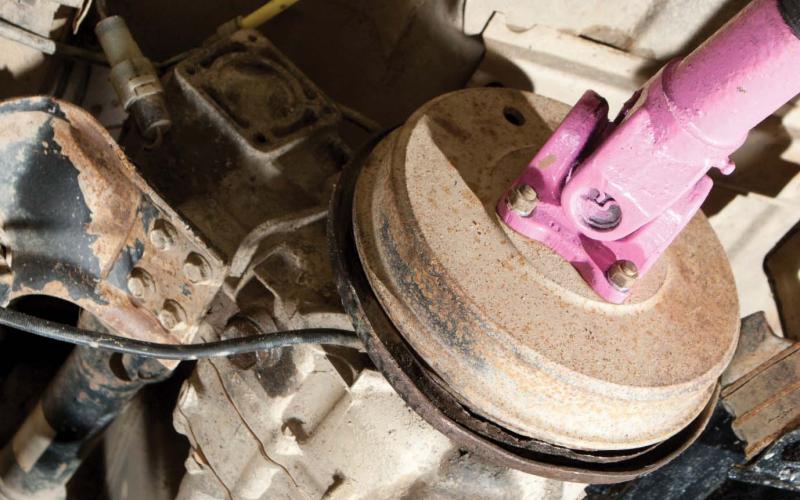 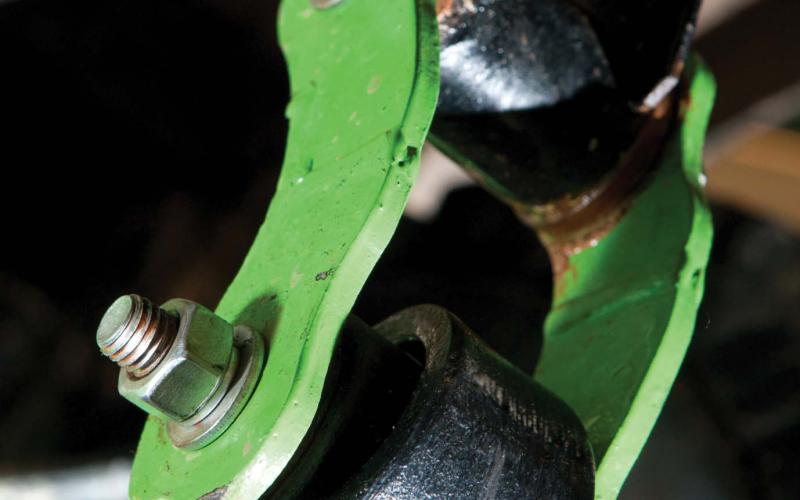 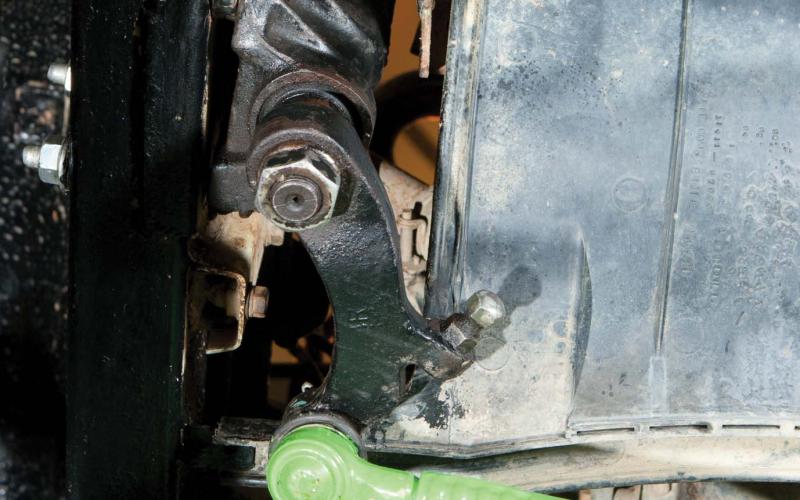 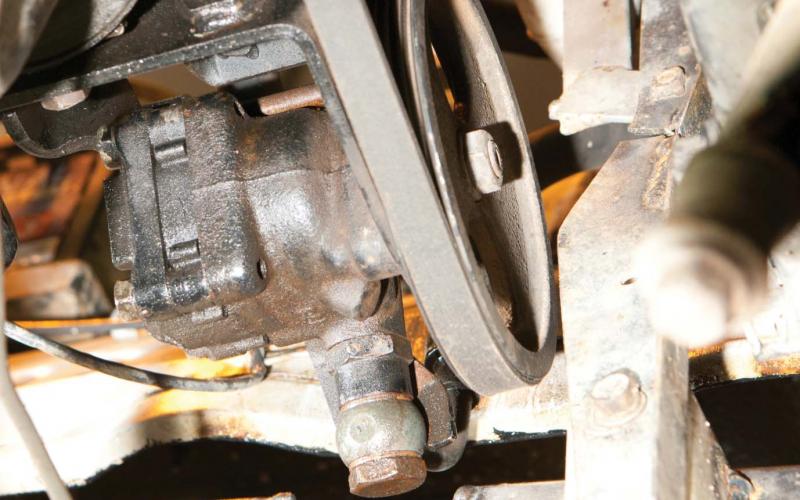 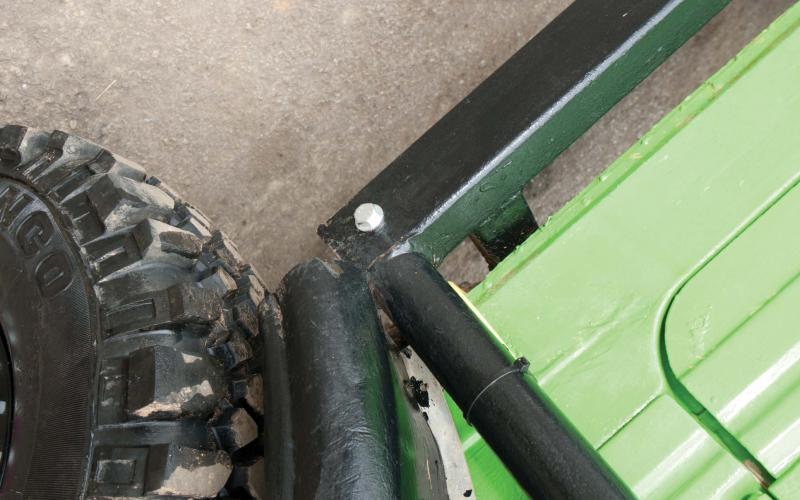 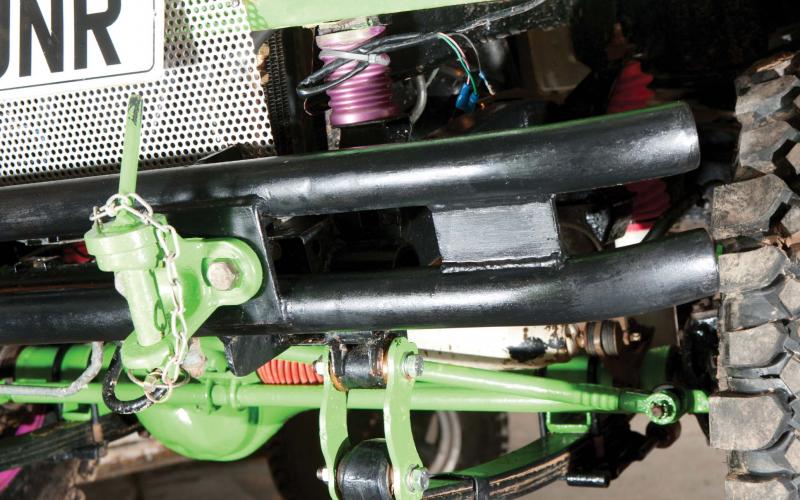 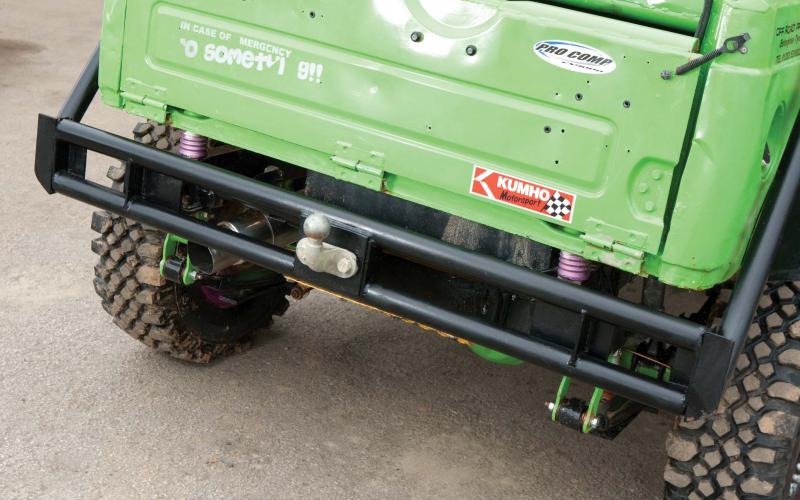 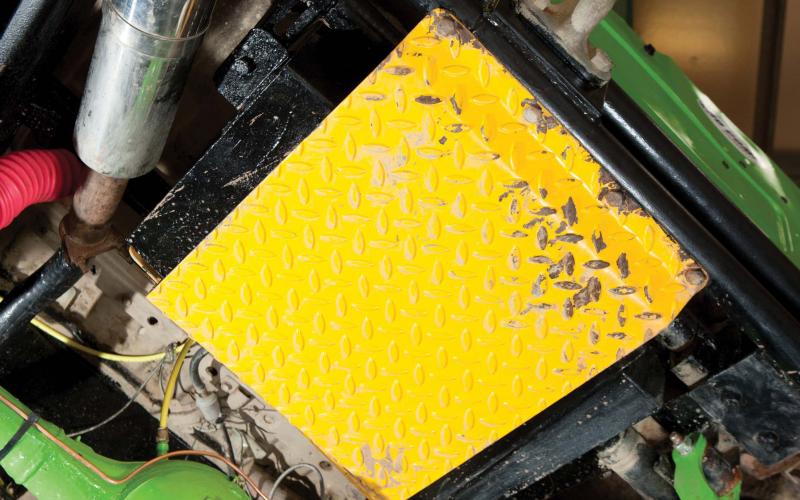 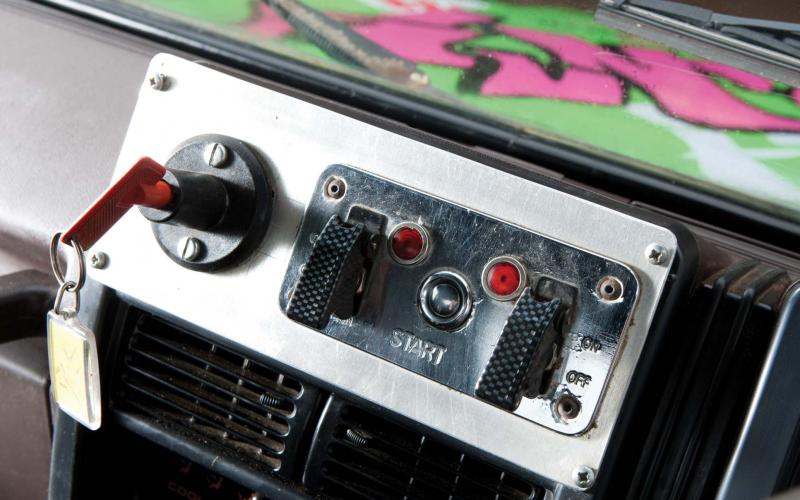 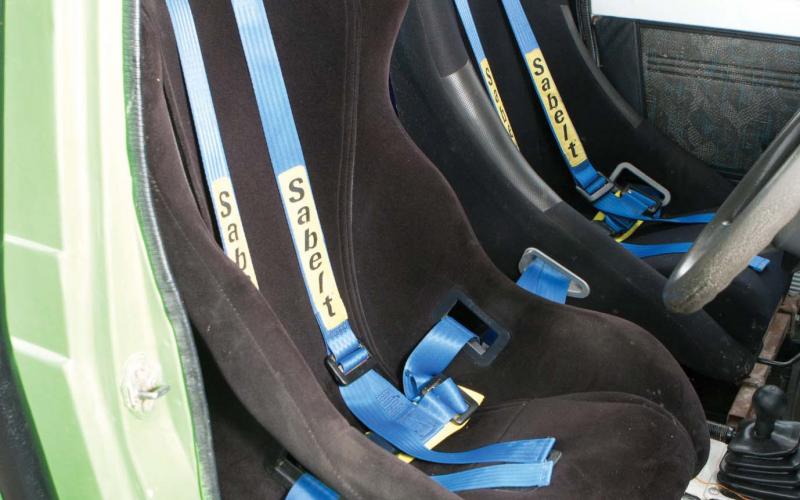 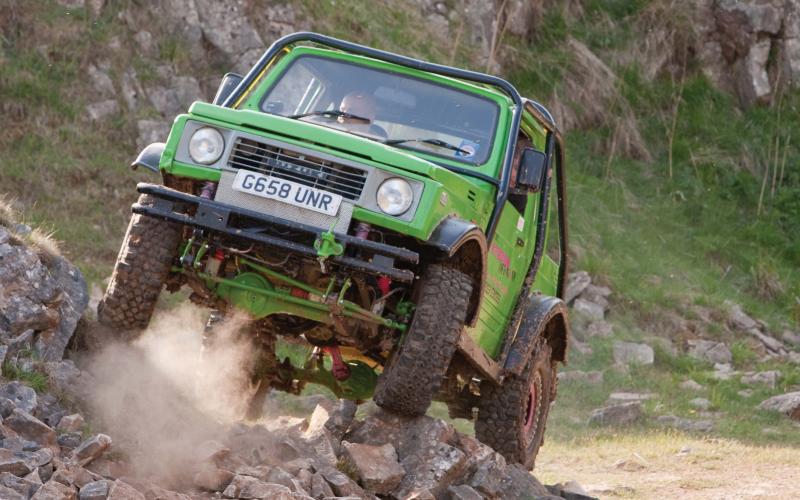 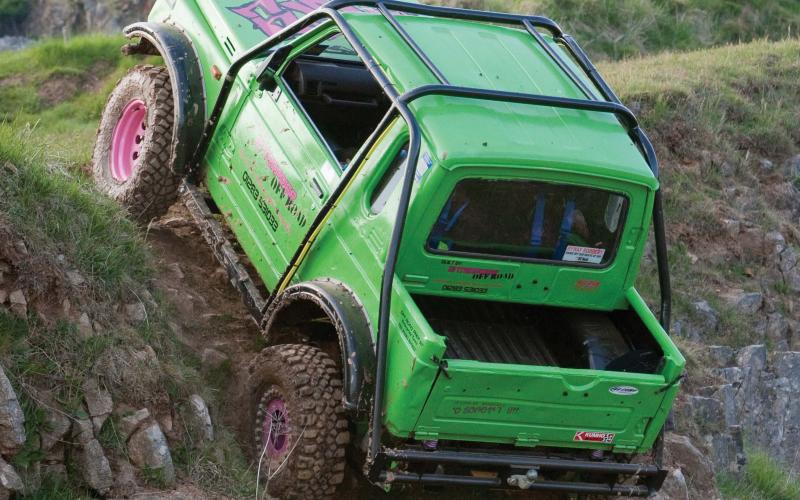 Gareth Orme bought himself a Samurai that was basically standard but for an interesting mixture of Barbie Pink and Ken Green paintwork. Since then, he’s fitted more mods than you can shake a stick at, rolled it four times and turned it from a station wagon into a pick-up. But he’s never shown it the business end of a paint brush…

Pink. It’s not a colour one associates with men a lot. True, there’s the pink triangle for some, and city types wear pink shirts, preferably by Tomas Pink, and it’s the colour of my eyes some mornings, but generally it’s not something we see as an accent colour on a chap’s 4x4.

Green, though, yes, we like green. Although the particular green on this vehicle is more the shade you’d see on a plastic 4x4 toy selling for 99p than on a real grown-up toy like this SJ.

What, exactly, is owner Gareth Orme trying to tell us? He shrugs. ‘It’s a very bad paint job.’ So far we’re all in agreement. It transpires that he bought it like this, which is one reason it cost him £300. Oddly, even though he’s made numerous changes to his Suzuki, some of them quite comprehensive, he hasn’t seen fit to change the paint job. If I was a psychiatrist I’d be asking him about that.

However, we’re not here to gaze deep into Mr Orme’s personal psyche and thank heavens for that, we’re here to see beneath the paintwork. Which so far we’ve singularly failed to do.

One of the first things to point out, beyond Gareth’s interesting taste in colours, is that he’s a mechanic and garage owner. In fact, he’s the proprietor of Enterprise Off Road in Burton on Trent, whose clients number among them the editor of this actual magazine, and a very satisfied customer he is too, so clearly this is someone who’s got very personally involved in the changes you see. To put it another way, he’s basically done all the work himself.

Gareth wanted a 4x4 since before he could legally drive one, and an SJ410 was his very first vehicle. Since then there’s been any number, not all of them from Japan.

One of the common threads, whether the machines were Japanese or English, is the way he’s had to fight the rust and rot in every one – although to be fair this is partly down to them being older vehicles in more interesting conditions.

Behind him is a bobtailed Range Rover with all the kit – getting the rot out of that one alone took three months – plus an assortment of SJs, usually rebuilt, with serious off-road tackle added. They’ve all been used hard too, with various clubs like NNOC and Northern Monkey Off Road, and he’s also been on numerous green lanes and play days.

But what he turns up in now is this multi-coloured beastie. When he got it, it was completely stock apart from the paint job (did I mention that?), so he literally worked from the ground up. Tyres were fortunately the only part of the vehicle touching the ground at this stage so they were replaced with 235/75x15 Kingpin Amazons. Did you know their block design is officially known as ‘Dan Dan’? Today’s trivia entry. Rather oddly, and as a small digression, we can’t help but notice that in some of the pictures there seems to be a mash-up of one of these and a Bronco Grizzly Claw mixing it on the front. We’re sure there’s a sensible explanation.

While he had the wheels off – which are terribly pink aren’t they with nice little pearl necklace highlights – he fitted a rear disc conversion to go with the Vitara fronts. The rear discs are actually off a Vauxhall Vectra, which originally had Rover calipers for some reason, but after they’d rusted up yet again he got rid of them. He also added stainless steel extended brake hoses, which he thinks were also off a Vectra.

Inboard from the brakes, the axles are standard although the axle breathers have been remade with old air lines. Propshafts are also original, although they’ve been repaired a few times and have also had the indignity of being painted pink.

Moving yet further upstream, we come to a gearbox from an SJ413 which is linked to the rather impressive Calmini Rockcrawler Transfer Case Gearset. Originating Stateside, this one was put in by Gareth, who welded and pressed the gears into place himself, giving him the kind of low-speed control he was after.

The engine attached to the gearbox was from a Vitara and is the eight-valve model. It now sports a custom-made SU carb conversion which goes via a welded adapter straight on to the manifold. A custom distributor was added as Gareth found a flat spot in the acceleration and he reckons this cures that. In fact this is about the sixth engine this rig has sported. One was even from a Swift GTi with twin carbs, the works, but now he’s settled for a more staid motor.

The engine itself has new mounts and is fitted with a Vitara radiator, an electric fuel pump and an electric fan. There’s also a power steering system added, again from a Vitara. Suzuki generally seems to have provided a lot of kit for this rig.

What the company didn’t supply was the 3” body lift kit, which goes with Pro-Comp shocks all round as part of a 2” suspension lift. The leaf springs are all heavy-duty and have extended shackles at the rear – they did have at the front too, but Gareth took them off after they kept catching on rocks and stuff. All the bushes have been replaced with poly versions, and it all worked well until one day one of the springs broke on the way home.

Ingenious to the last, Gareth remembered some story from a desert trip and put a spanner top and bottom of the broken spring then gaffer-taped and zip-tied it all together. Amazingly, this mother of all field repairs worked for ages before he bothered to replace it.

His ingenuity was taxed further when he went out to play and instead had a bit of a moment. The scene was Bewdley, and Gareth’s world turned upside down. Four times in fact. After that many rolls, the Suzuki wasn’t looking terribly good, although Gareth’s home-made roll cage had taken a lot of the strain as well as saving four of his lives.

Time for a bit of a body rebuild. The SJ got the pick-up treatment, much of it fabricated by Gareth. Rather cleverly, the top part of the rear door, the window part, now forms the basis of the back of the cab. The bottom part is now the tailgate. Smart. In between, he fabricated a lot of sheet to make up a sort of truck-cab look.

The fuel tank under the bodywork was also made by Gareth, out of 1.5mm thick metal with three large internal baffles to stop fuel sloshing about on climbs and descents. And rolls. With the fuel pick up positioned at the rear of the tank, he knows he’ll have fuel for the steepest of ascent, which let’s face it is more important than for the descent, isn’t it?

Over the bodywork, he refitted the straightened out roll cage, which was largely undamaged. He also made the bumper assemblies, something he’s done for other people too. Rather neatly, they form the rear of the roll cage, as well as the base for the fuel tank guard, which is made of the same tubing as the roll cage. The cage has six brace points and is attached to outriggers on the chassis rails, the whole being made of 4mm tubing. It’s strong and it works, and extra tubing is used to strengthen the rear of the tub. Next time he goes over, he’ll feel safe inside that little lot.

Deeper inside that cage, things are relatively normal. The cool driver’s seat is a composite bit of trickery and came out of a Shelby GT car, with a Swift GTi steering wheel ahead of it. The benefit of the wheel is that it’s slightly smaller than the original, which gives him a bit more knee room. On the dash there is a custom control panel which has a master cut-off switch in case he decides to go roly-poly again. Otherwise it’s not terribly pink.

All in all, this vehicle is considerably more serious than its paint job would suggest. There are lots of modified Suzukis out there: some of them look terrible but work well, while others look great but all the wheels turn in different directions. As you can tell, despite being a grown man I can’t resist taking the proverbial out of a pink motor, but would I let Gareth work on my car? Well, the editor does, and if it’s good enough for him…

This, then, is a man who has clearly brought professional skills to the task of resurrecting a rust bucket to a high level of mechanical specification and off-road capability. He’s built it, fixed it, rebuilt it and fixed it some more, and what he’s created is a very sorted truck indeed. Still, after all that work… why hasn’t he done a respray, eh?