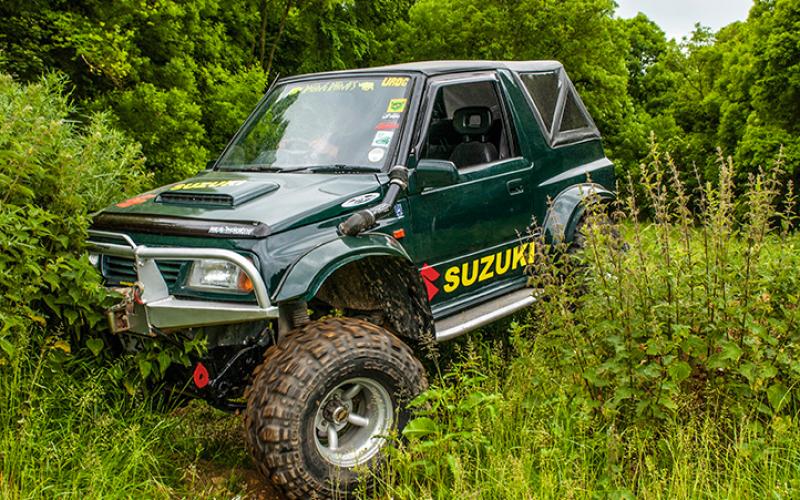 It was more than a decade ago that the 35” tyres on Leigh Catherick’s Vitara first caught our eye. But the same vehicle was recently put up for sale by a subsequent owner, which got us harking back to how it used to be. It’s been tweaked further since then – but it’s still very much the same truck it always was. Which means it’s still one of the tallest Vitaras you’ll ever see…

A decade or so ago, most of the Suzukis you saw being turned into modified off-roaders were either SJs or Vitaras. A few pioneers were already working on Jimnys, and a tiny number of Grand Vitaras were given the treatment, but back then it was still a very different world.

The number of modded Grand Vitaras has remained tiny since then, thanks mainly to the fact that the Jimny has completely taken over. And some of the builds we’ve featured in TOR down the years have shown the extraordinary things people have done to that vehicle.

But there’s still never been anything like the Suzuki you’re looking at here. It was built by Leigh Catherick, a well known character in Suzuki circles in the south-east – and if you’ve got a long memory, you might recall that it appeared in the magazine once before.

We were prompted to revisit Leigh’s Vitara this month for a very simple reason. Which is that we were browsing on eBay, as you do, and there it was. We don’t know the path it took after we photographed it back in the day, but it cropped up in Wiltshire (something a lot of 4x4s do at one time or another, though normally on the green lanes rather than being offered for sale).

Anyway, there it was. And here it is.

When he set about modifying the Vitara, Leigh wanted to fit it with a really serious set of tyres. But he wasn’t a fan of body lifts.

Instant problem. The sort of suspension lift it would take to let a Vitara wear 35” tyres (as this one does) is immense. Big enough to be full of knock-ons even on a truck with live axles – and the Vitara’s front end was very much independent.

The answer? We kid you not: Leigh lifted the body by fabricating a whole new chassis.

Using the original as a jig, Leigh designed a whole new frame which he then made up in high-strength steel and fitted with a new rail that raised the body and engine mounts. The latter was necessary because without it, the engine would sit so far beneath the bonnet that you’d need to dangle yourself from a crane to work on it.

As it is, you open the bonnet and it all looks normal. But the body sits high enough to make way for those 35” boots – Super Swampers in our photos, though during the intervening years they’ve given way to Simex Extreme Trekkers.

‘It’s verging on monster truck status,’ laughed Leigh when we talked to him about the vehicle. ‘I reckon this is about as high as you’d want to go before the risk of breaking the transmission becomes too great.’

As it is, the Vitara’s drivetrain was never designed for this. That front diff… shudder…

Hence the appearance of Warn fusible hubs at the end of the front driveshafts. Go beyond what the laws of science consider sporting and, rather than something expensive and awkward to replace letting go, one of these will take one for the team.

The tyres were (and still are) fitted on Matt Lee alloys with an 8” offset. That means the truck’s width is increased by a good proportion of its height, which in turn means it doesn’t fall over if you lean on it (in more or less any sense of the phrase) – and also prevents its steering lock from being reduced to about one degree.

It’s been all about body height so far, and indeed that does put you in mind of the monster trucks Leigh joked about. So you might well be looking down your nose as what you’re seeing and preparing yourself to reach a damning verdict on the off-road abilities of something with so much lift but no more flex.

Fear not. There certainly have been Suzukis with lots more going on at the front end, but this was no totterer. Not with a set of +1.5” Pro-Comp coils all round, in combination with strut spacers up front and extended trailing arms at the back.

‘There’s enough extra travel in the springs to compensate for everything else being that much further away than standard,’ Leigh said. ‘And the shock absorbers have four inches of extra travel.’ Those shocks were Pro-Comp ES3000s, and Leigh repositioned the ones on the back to liberate as much articulation as possible.

Yes, though, this was always going to be a truck with more height than flex. But watching it off-road, it follows the ground with more agility than you might expect. Of course, tyres of that size can simply plough over the sort of obstacles that would have a standard Vitara waving wheels or grounding out, but while there’s got to be an element of choosing where you drive in a thing like this, it moves around with a nice degree of suppleness on a set of suspension components that remained surprisingly close to standard.

Leigh probably remains best known for the live front axle conversion he developed for the Vitara, for example. But he was determined to keep this one independent, citing the weight of the new chassis. So what you’re seeing here is a Vit on its original front wishbones – which, Leigh told us, never grounded out.

On top of the extra steelwork in the chassis, the front suspension also has to cope with a heavy-duty winch bumper that Leigh fabricated himself. This was fitted with an 8000lb Sagittarian with steel cable when we took our photos, though the most recent owner has replaced this with a 13,000lb unit – as well as installing ARB Air-Lockers in both axles, which should certainly put paid to any lingering concerns over the amount the suspension can flex.

Back over to Leigh, he fetched out the Vitara’s original 8-valve engine and replaced it with the carb-fed 16-valver from a Suzuki Swift. A simple, like-for-like swap, and by fitting the new unit with an SU carb he could relax on steep hills without having to fear fuel starvation.

Mating the Swift engine to a five-speed manual Vitara didn’t cause Leigh any undue grief, and nor did sorting out the vehicle’s overall gearing by bolting this up to the transfer case from an SJ410. ‘With the Swift engine in place,’ he told us, ‘you barely need to rev the engine to get fantastic performance both on and off-road.’

The engine is cooled by a standard radiator, with the assistance of an air scoop in the bonnet, and breathes through a snorkel Leigh created using 2.25” bore steel pipe.

In addition to the front bumper, Leigh also fitted heavy metal everywhere else a vehicle is likely to ground out off-road. The rear bumper is a custom job fabbed in steel plate, and the sills are jackable – as well as extending out to meet the extra-wide arches required to cover the massively offset tyres.

When we spoke to Leigh all those years ago, he was working on a second Vitara along similar lines. That means this is one of only two in existence – though it’s probably fair to say that both are unique.

We don’t often get to see what becomes of old TOR feature trucks, and when we do all to often they’re a sorry shadow of their former selves. So it was really pleasing to see how little Leigh’s Vitara has changed in the decade and more since we met him – and that rather than being trashed by life after leaving its builder’s hands, it’s become better than ever.

Back when we took these pictures, we were all assuming that Grand Vitaras would come through to become a big noise in the modding scene. The fact that they didn’t says much for the brilliance of the Jimny – but if you can prevent yourself from looking at these pictures and imagining what a late Grand would be like with the same treatment, you’re doing better than us…