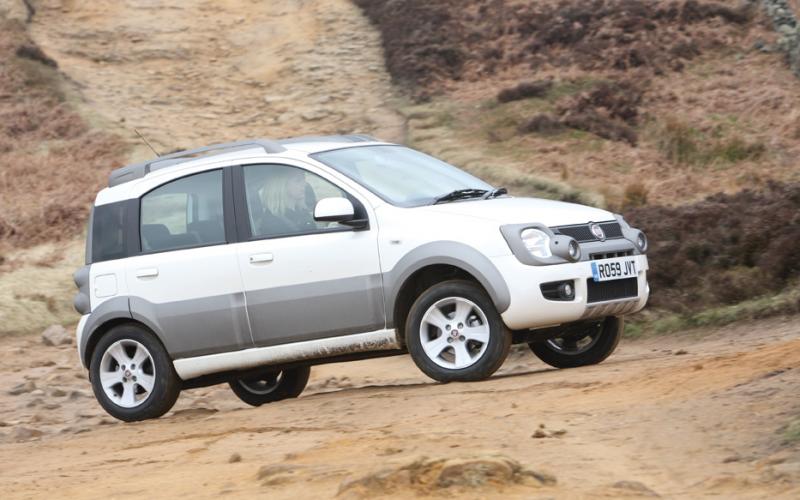 What is the Panda Cross like when it comes to driving and living with the Fiat model?

Everyone loves this car. Testers, testers’ other halves, anyone we parked next to… the Panda Cross is the ultimate in good-humoured 4x4 chic.

Its size helps, of course, but so does its cheerful styling. This is carried over into a cabin that’s small, naturally, but nicely laid out using tough but welcoming trim materials.

It’s very easy to work out where all the controls are, but our testers were less impressed by the stowage spaces around the cabin. The glovebox and door pocket are fair, but there’s no space between the seats for anything of any substance. Bits and pieces are likely to get shoved in the large, sweeping area of behind the instrument binnacle and above the passenger’s airbag cover, and a non-slip surface here would make it much more usable.

At the back, split-fold seats are standard on the Cross (they’re an option on cheaper models), and these slide as well to let you juggle the balance between passengers and cargo. With a full complement of the former, you won’t be able to carry much of the latter, but with the rear seats down you’ve still got 780 litres of space to play with.

Even with the seats slid fully back, knee room for passengers is hardly generous. Headroom is limited, too, so even if you do manage to cram yourself in there you’ll still feel pretty hemmed in.

The Cross has a small but grunty diesel engine as standard, and the combination of top torque at 1500rpm with a low kerb weight means it’s a lot livelier than our testers expected. First gear in the five-speed manual box is deep enough to let it crawl around off-road without you needing to hold it back on the brakes or slip the excess torque out of the clutch.

On faster tracks with a firm but loose surface, the Panda’s tiny footprint means its body gets flung around by every pot hole. Most of the time, though, those same tiny proportions mean you’ll be able to dodge your way through the roughest bits.

One reason for this is that the Panda features a button on the dash which lightens up the power steering. This is designed to make it easier to park, but you can see why it would help as an off-road manoeuvrability aid.

It’s one reason, at any rate, why our testers particularly liked the Panda’s zest and handling around town. Its steering is sharp and direct, it rides well over manhole covers and such and the diesel engine doesn’t make any untoward noise.

Even on the open road, it continues to punch above its weight. Uneven surfaces get the suspension bouncing when taken at speed, but its light weight lets it skip away from harsher pot holes. We were impressed by its braking, too, where it feels as nimble as ever.

There’s more body roll than most in really hard corners, but even here the Panda sticks to the road with enormous conviction. Once we got it on to the motorway, testers mentioned an element of wind and road noise, but here too the diesel unit doesn’t get boomy.

The Panda Cross has loads of style but plenty of substance, too. It’s great fun in town, a rough diamond on B-roads and pretty acceptable on the motorway. And it can do remarkable things off-road. If only what space it has was used more cleverly, what a 4x4 it would be.