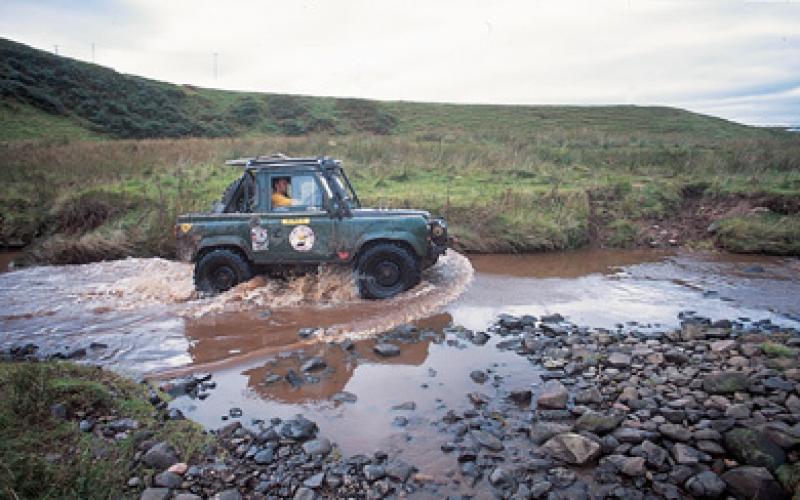 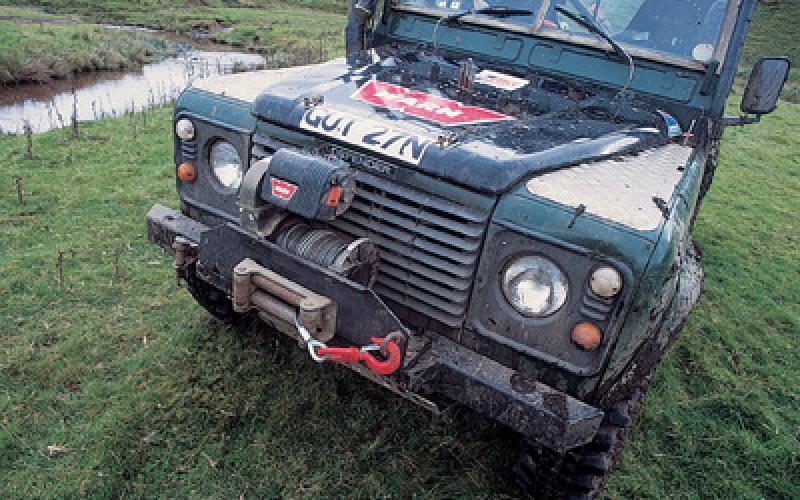 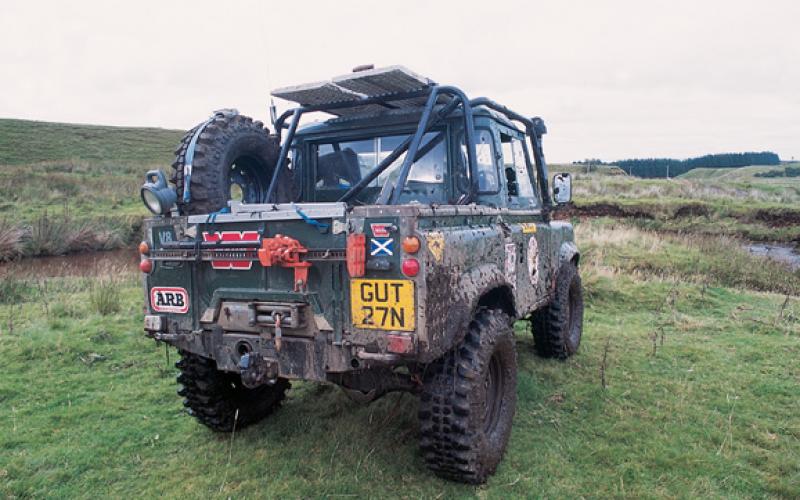 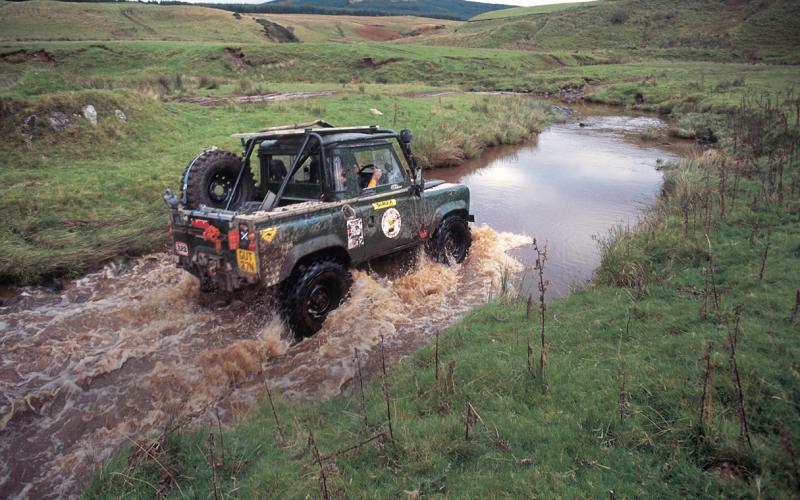 Fraser Wenseth set out to build a clean, tidy coil-sprung Land Rover for the road. What he ended up with is in many ways exactly the opposite. And it’s all the better for it.

One of the absolute truths of 4x4 projects is that they never end up the way their builders intended. If they end up in any recognisable form at all – as opposed to being given up on in despair – they’re normally far better than they would have been had their proud owners stuck with Plan A.

This is ironic, because few people set out with the intention of creating anything less than the most unstoppable off-road dream machine of all time. And that may well be the reason why so many projects get abandoned. You see, when you’ve started out with dreams of ultimate all-terrain ability, settling for something that’s merely good, and hopefully doesn’t catch fire too often, can’t help but feel like a bit of an anticlimax.

Those who stick it out, however, normally find that toning down their plans is the key to creating a vehicle that actually works. And the Land Rover you’re looking at on these pages is a fine example of… well, pretty much exactly the opposite. Because when owner Fraser Wenseth started work on it, what he intended to build was a tidy coil-sprung motor for the road.

You can’t deny that while the result is tidy, at least in one sense, it doesn’t look much like a daily drive plaything. And that, ladies and gentlemen, is because it’s not. Fraser is partner on challenge events to no less a luminary than Bob Webster, which must put his vehicle in the top 0.1% of 4x4s when it comes to being beaten to within an inch of its life on a regular basis.

Yet it all started out so innocently. ‘I was fed up with my Series III not being able to get up the big hills my mates could with their coil-sprung V8 Range Rovers and 90s,’ he recalls. ‘I couldn’t afford a 90, so I set about building my own.’

This is one of those matter-of-fact comments you expect to hear from professional mechanics or garage owners to whom the prospect of building a vehicle from scratch is about as big a deal as going to the toilet. But in Fraser’s case things were rather different. ‘Being a manager for Tesco, I didn’t know anything about building Land Rovers. So this was a learning curve.’

The first lesson was that when you replace your old 7.50s with a set of Dirt Devils, you can no longer rely on staying healthy by always losing traction before things get interesting. ‘I found myself getting all sorts of places and in all sorts of trouble,’ recalls Fraser. ‘You can tell it’s been on its roof a couple of times, can’t you?’

The roof in question is that of a truck cab, which is the configuration Fraser had aimed for from the start. But that’s about all that remained of his original plans, because the arrival of the Dirt Devils gave a whole new dimension to the vehicle’s off-road capabilities. And, there and then, a simple hybrid build turned into something altogether more adventurous.

By now it was obvious that the vehicle was going to be used for far more extreme off-road work than had initially been intended. A six-point external roll cage was among Fraser’s first responses, and a front-mounted Warn 8274-50, mounted on a home-made front bumper, came along soon afterwards. Thus armed, he was in a position to start competing in challenge events. But inevitably this was the end of the beginning, not the beginning of the end.

Needless to say, the arrival of challenge work meant it wasn’t long before Fraser was introduced to the joys of the diff and halfshaft (blown). And what better excuse could a man want to tool up with a couple of ARB Air-Lockers? Wisely, these feed out through a set of Ian Ashcroft’s strengthened 24-spline halfshafts, which meant appending later ABS hubs to the hybrid’s axles. These were donated by the 1974 Range Rover that laid down its life for the project.

Providing the motive power is a 3.5-litre V8 that was robbed from a Rover SDi. It breathes in through a Camel Trophy snorkel and out through a custom stainless exhaust from EastSide Performance in Kelty, Fife. This replaced the old unit, itself cannibalised from a Range Rover EFi system, as Fraser kept knocking it off. ‘They did a cracking job of bending the tubing to keep it above chassis line,’ says Fraser, ‘and it sounds great to boot.’

Initially, the engine ran on carburettors, but the rigours of extreme off-road action meant they were constantly falling out of tune. The remedy was a Lucas hotwire system from a 3.9 EFi, supplied by LRR Range Rovers in Woolwich – a company which Fraser singles out for praise, saying they ‘showed a great deal of patience when it came to working out what bits would best fit my project’.

Contrary to what a lot of people might expect, the fuel-injection system was a cinch to install, with only three wires needing to be connected to the home-made loom, and an electronic distributor replaced the V8’s temperamental points-type unit at the same time. ‘I reckon this was the single biggest improvement,’ says Fraser. ‘The motor hasn’t missed a beat since and is probably 20bhp up on power.’

Did someone say ‘power’? That’ll be the gearbox on the way out, then. Fraser has actually done quite well and kept to less than one box per annum, but despite this the vehicle is on its fourth five-speed manual LT77 in six years. The transfer box feeds out through long-travel props from Gon2Far, allowing the drivetrain to cope with the flexibility of a suspension set-up from Scorpion Racing.

Scorpion is of course famous for supplying the Extreme kit that revolutionised off-road suspension a few years ago and continues to feature on a lot of today’s most competitive challenge trucks, but Fraser’s view on this is singularly robust: ‘I wouldn’t waste money on the extreme kit. A decent set of tyres and the ARBs will get you most places anyway.’

As it is, Scorpion’s plus-two Pro-Comps and coil springs (progressive at the rear) were ‘money well spent’. They must be, because unlike gearboxes the first, second and third, they’re still there. Fraser initially opted to uprate the truck’s suspension as the old Range Rover kit was beginning to groan under the load of all the extra weight it was being asked to carry, but the additional flexibility the vehicle displays with the Scorpion and Pro-Comp set-up in place would be reason enough for most off-roaders to consider it worth the investment.

Adding to the extra weight is a rear-mounted Superwinch Husky, chosen specifically because its worm drive means there’s no brake in it to overheat – something that’s been a constant thorn in the side of challenge competitors on sections requiring vehicles to be lowered long distances while hanging on their winch cables.

With the arrival of the second winch, however, Fraser hit another problem.

Or rather, an existing problem started to become a whole lot more acute. The truck-cab format is unquestionably ideal for extreme off-roading, but it’s not exactly favourite when it comes to carrying equipment – and in off-roading, as the saying goes, you’re only as good as your gear.

Fraser had already solved some of the stowage problems within the cab by building a cubby box to fit snugly between the vehicle’s twin Cobra bucket seats. Trimmed in vinyl, this is slightly bigger than Land Rover’s own – but it still wasn’t enough to address the problem of where stuff was going to go in the back once the winch was in place.

‘Myself and my challenge co-driver John spent a whole day moving the rear around to work out how to make everything accessible for him when we were competing,’ Fraser recalls. ‘We eventually shoved the spare up on one wheel box, with a big locker on the other side, divided into sections for strops, shackles, chains and so on. A set of wheel chocks are fixed down to the rear of the fuel cell (a 45-litre affair from Rally Design in Faversham), then a German army waterproof ammo box is sandwiched between these and the winch. This contains a basic spares and tools pack I carry everywhere, and has been used to fix many other vehicles apart from my own. Oh, and there’s room for a couple of jerry cans down either side… well, it is a V8!’

However the best accessory, according to Fraser, is the fire extinguisher in the cab. You already know there’s a grisly story attached to this. In fact, there are two. ‘We had an oil fire on a challenge event while suspended by the winch cable on a 50-degree slope,’ recalls Fraser, who rates this, not unreasonably, as his ‘scariest moment so far’ with the vehicle. ‘And then we had another one recently, after some over-enthusiastic driving at the Scottish Hillrally left me with a punctured oil filter that sprayed all the engine oil over the hot exhaust, with predictable results.

It managed to empty the sump in fifteen seconds! And I was only there as marshal.’

Elsewhere inside the cab are a UK40/CEPT CB, a Brantz trip meter and a GPS, as well as map lights for night-time off-roading (or anything after about two in the afternoon at this time of year, especially in Fraser’s central-Scotland stamping round). The truck runs a basic 80-amp alternator, for the simple reason that it has ‘never needed anything fancier – it always leaves me plenty of power in reserve’, though twin Optimas are in place to help take care of the demands made by regular prolonged, heavy winching.

At least the winches should start seeing less action now, however, as team-mate Bob Webster’s Spirit of the Event award at the recent Argyll Forest Challenge yielded a set of Simexes – which saw Bob’s own set, veterans of the Malaysian Rainforest Challenge, passed down to Fraser. ‘I was never going to justify a grand on a set of tyres for the four or five challenge events we do together each year,’ he admits. ‘The motor spends most of its time at club trial events, fun days and doing recovery/marshalling at comps and the Hillrally. And for that, 235/85x16 Greenway Machos are just the job.’ The Greenways run on eight-spoke Weller steels, while the 35x10.50R16 Simexes are fitted to a mean looking set of Wolf rims.

The two sets of tyres point to the two sides of the hybrid’s character – trim, sorted and more than capable of its day job on one hand, and ready to punch above its weight on the other. It’s not one of those ultimate off-road wet dreams so many people set out with the intention of building… but then, it was never meant to be. And that’s probably why it’s closer to realising that standard than most starry-eyed projects ever get. It may have progressed in small steps, but Fraser’s project has made it far further in six years than all those next-great-things-in-off-roading manage in the six months their owners insist on believing it’ll take to build them.

Maybe if they started off trying to create a tidy road motor instead, fewer of them would be so easily deterred. Not that that’s what you’re looking at here. But then, seldom has there been a better advert for changing horses in mid-stream.