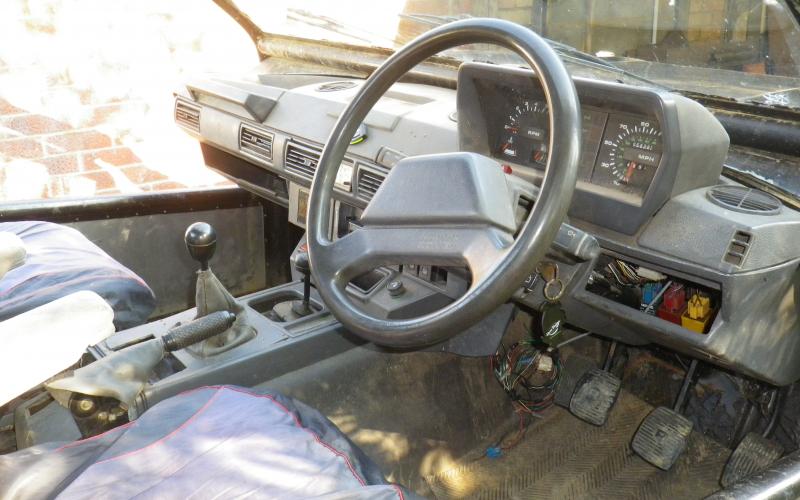 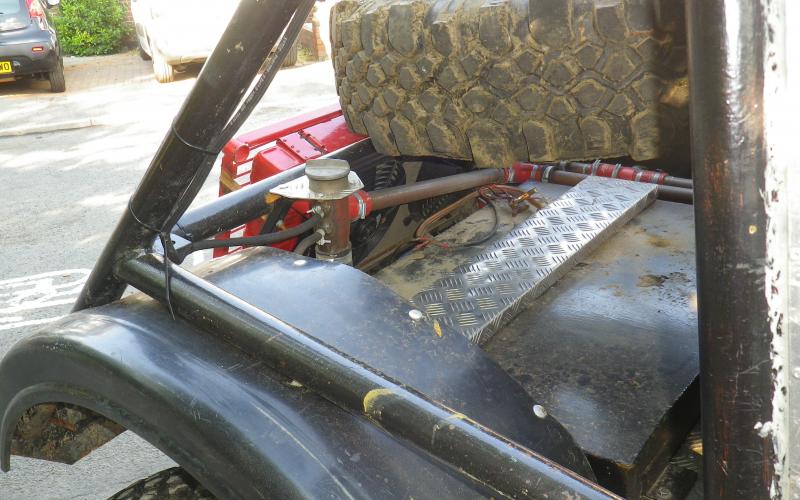 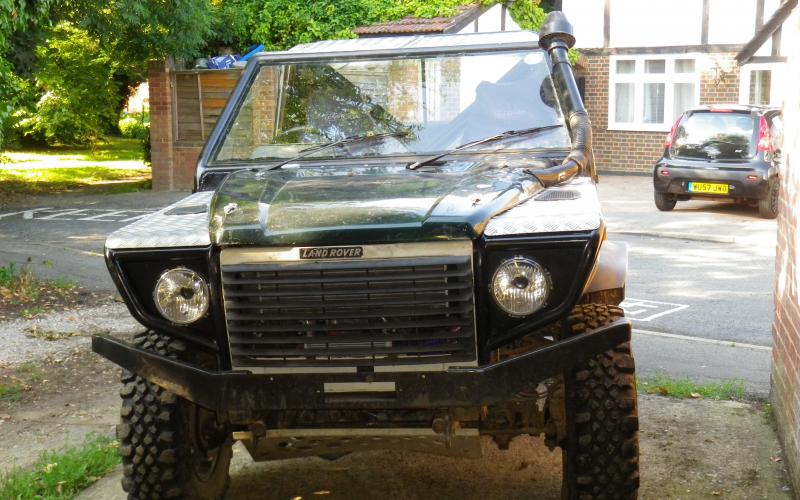 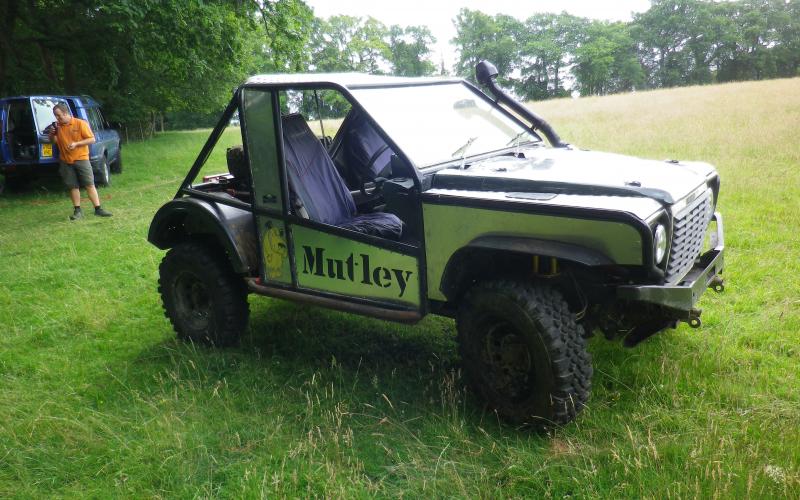 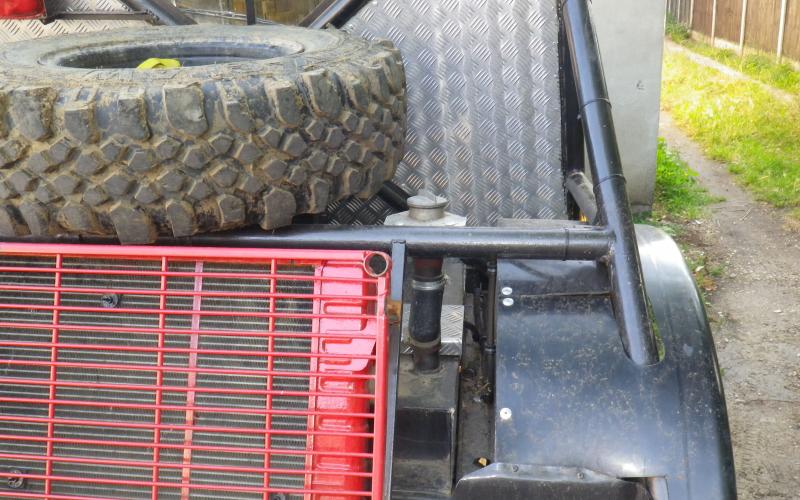 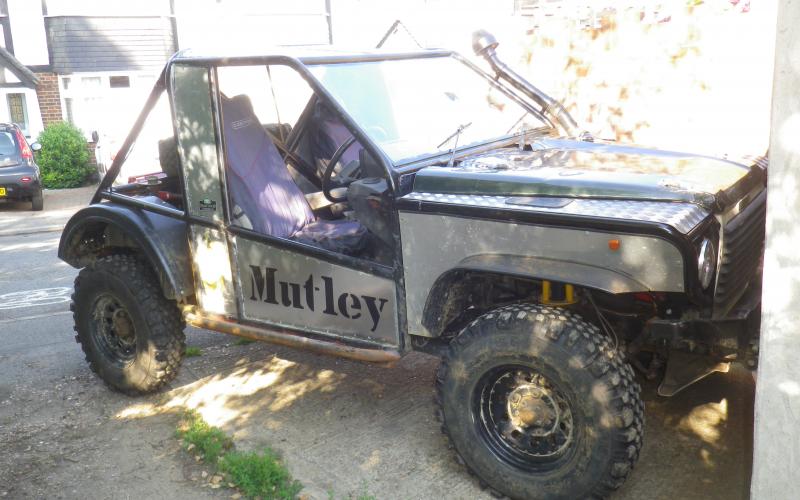 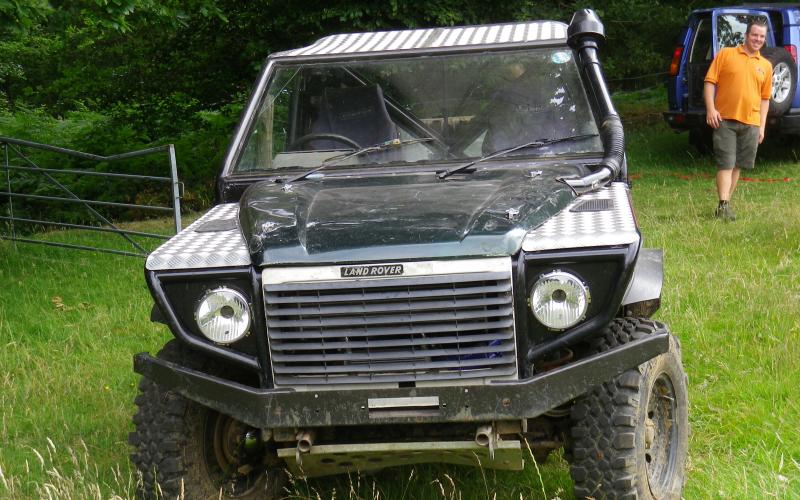 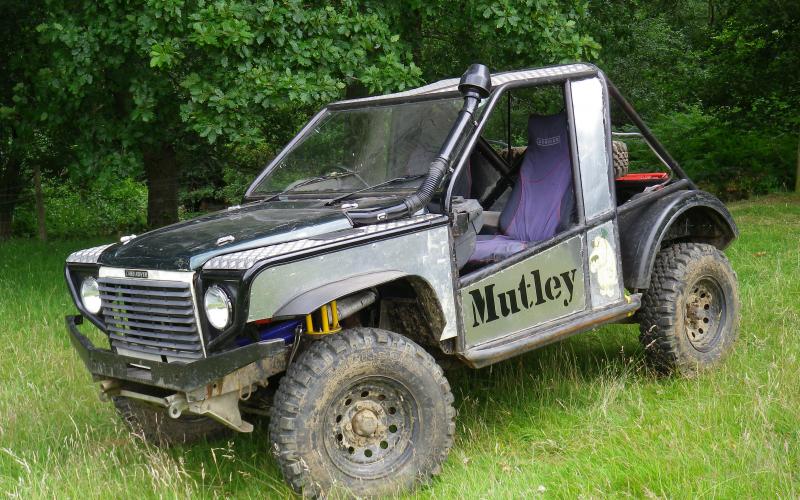 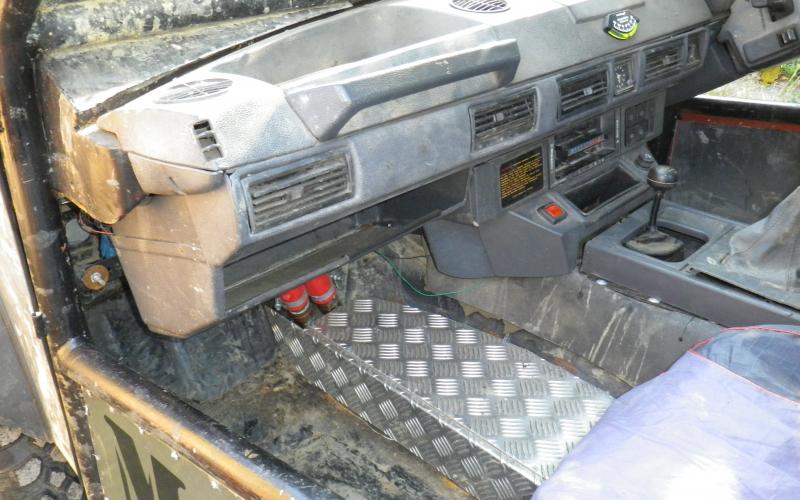 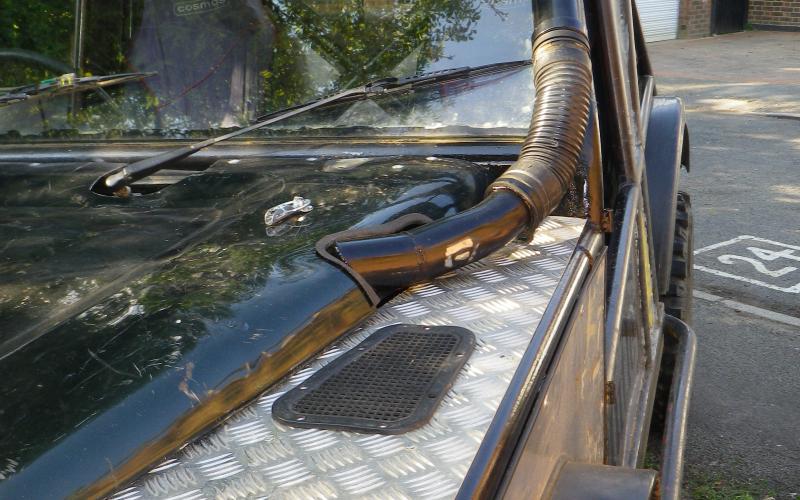 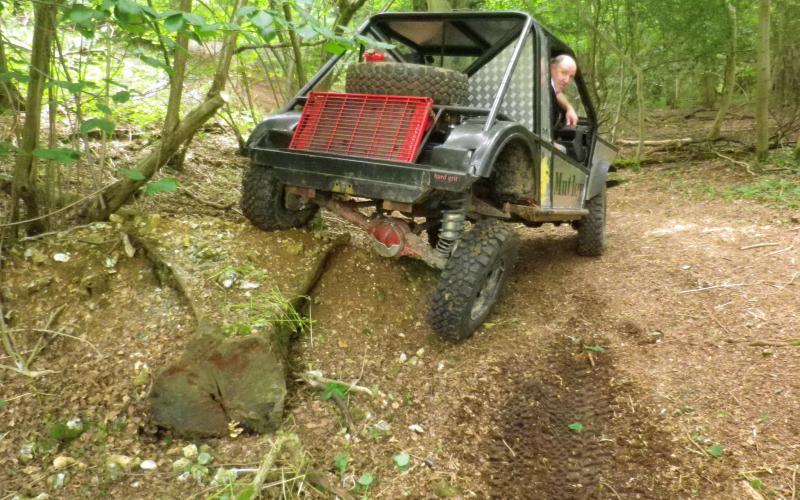 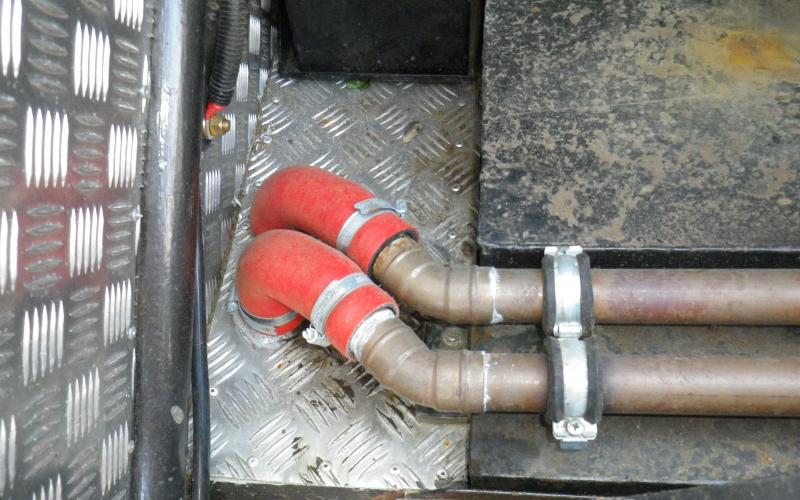 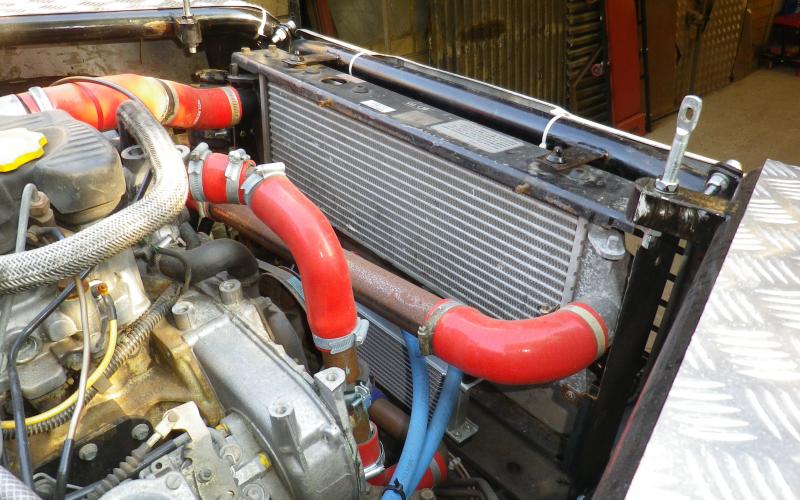 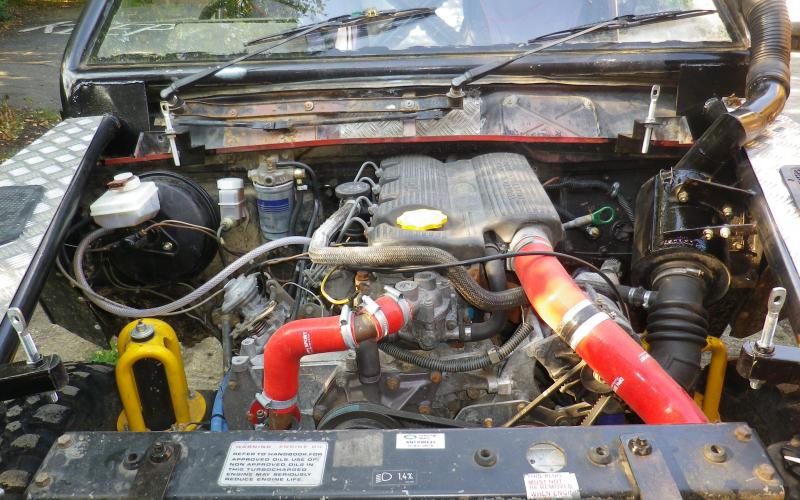 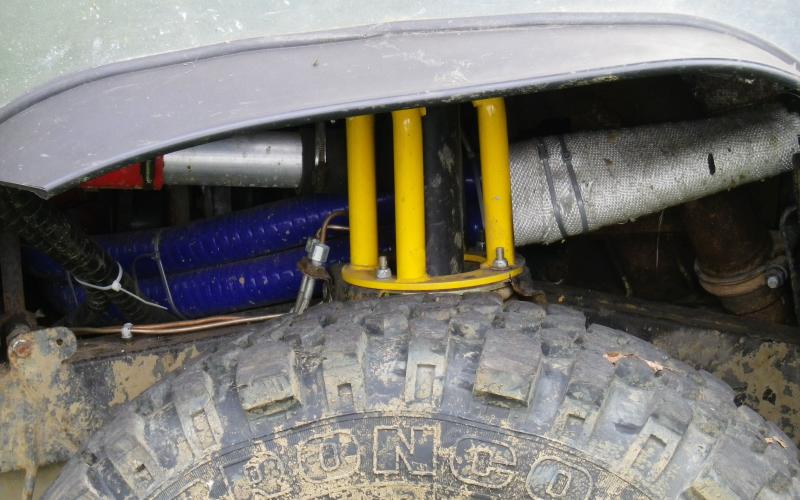 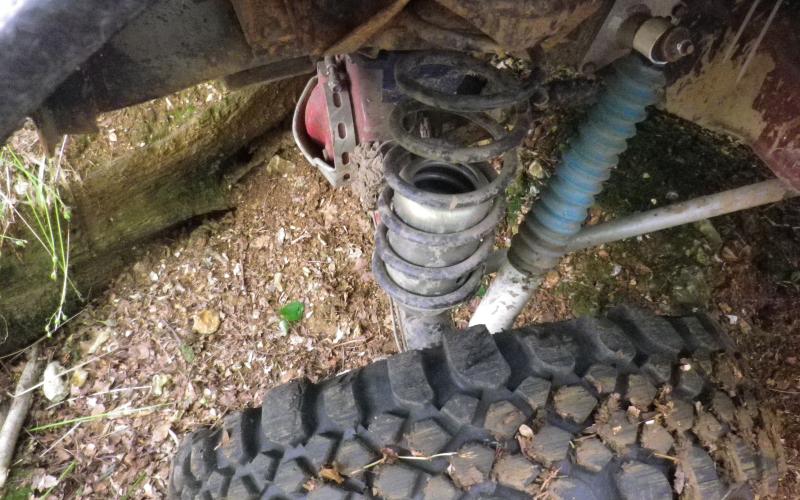 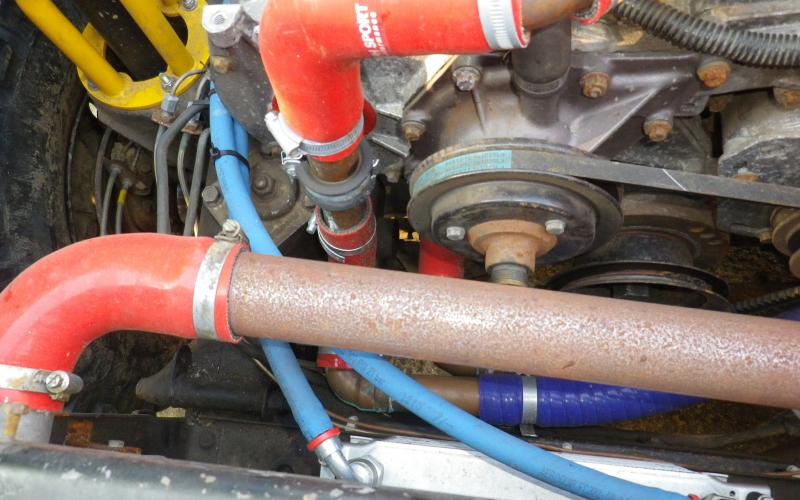 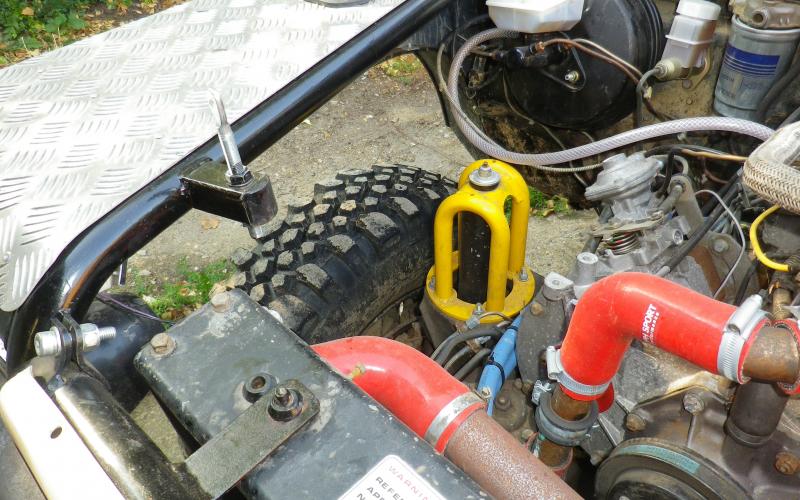 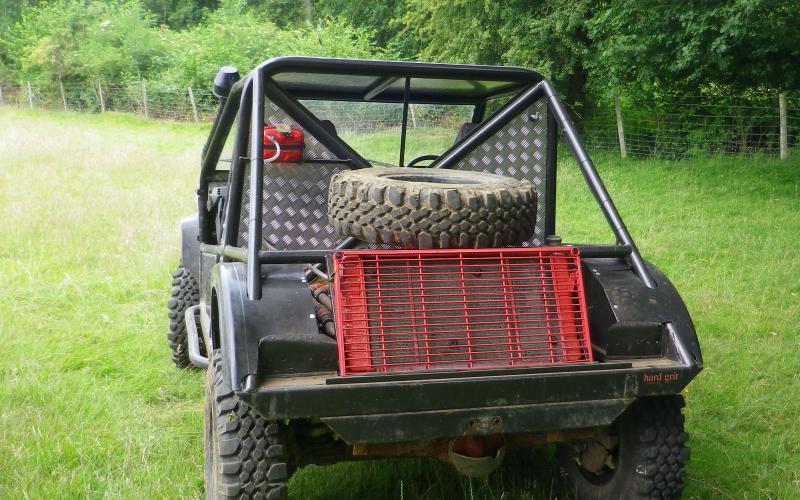 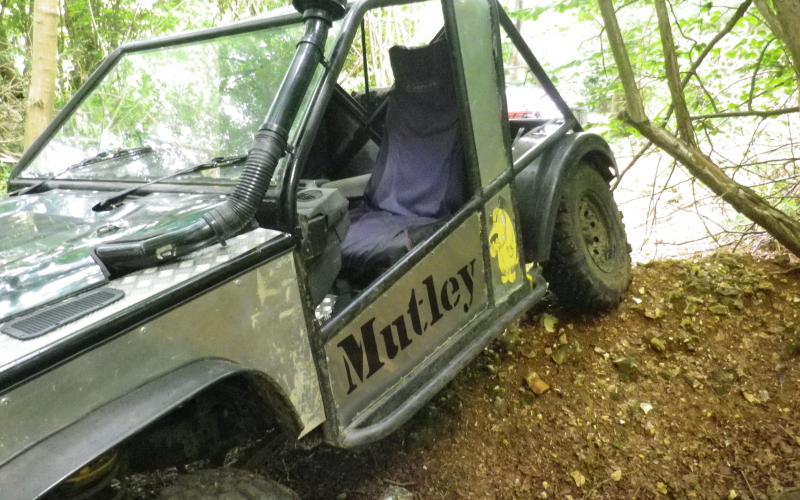 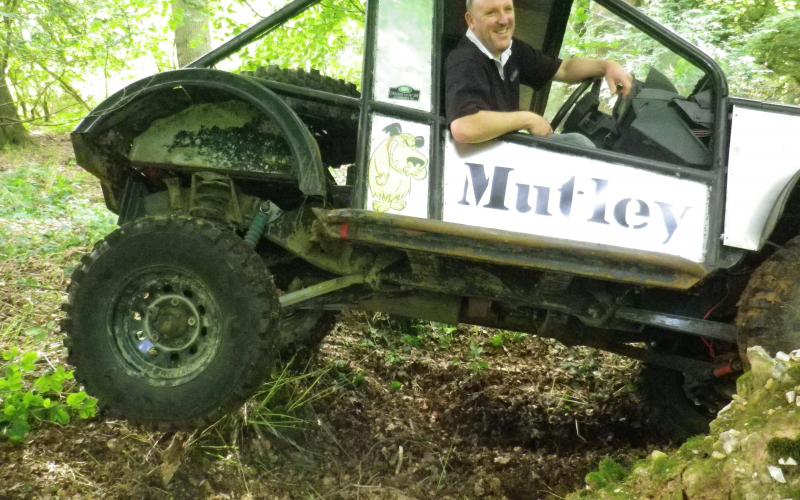 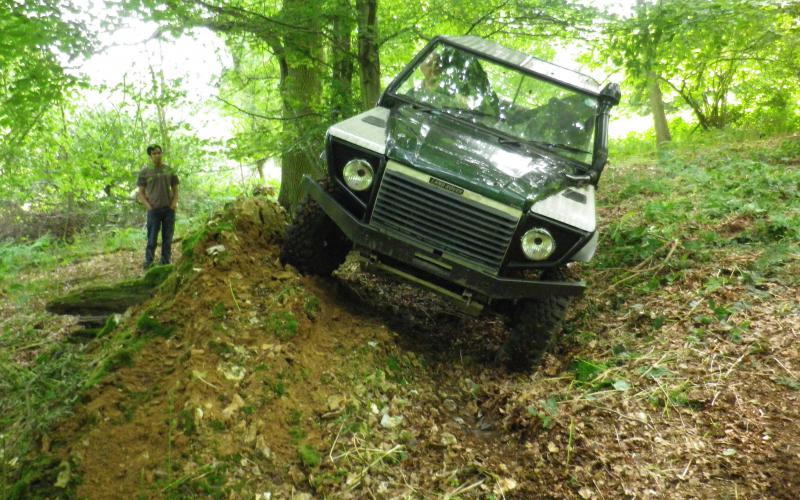 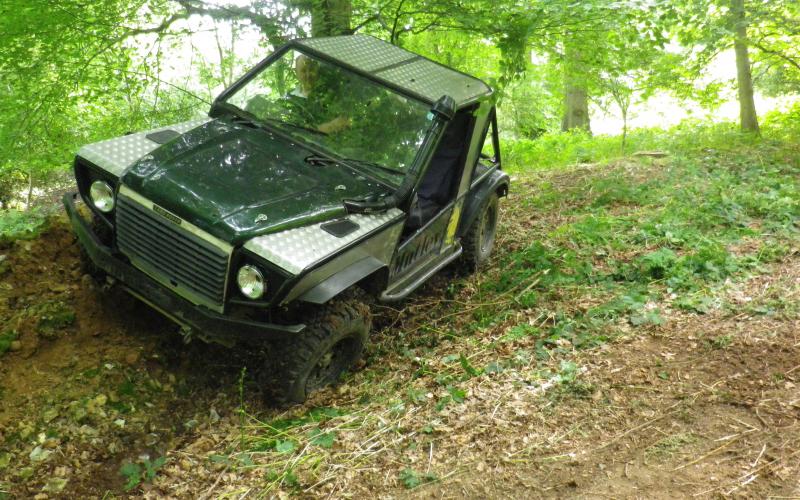 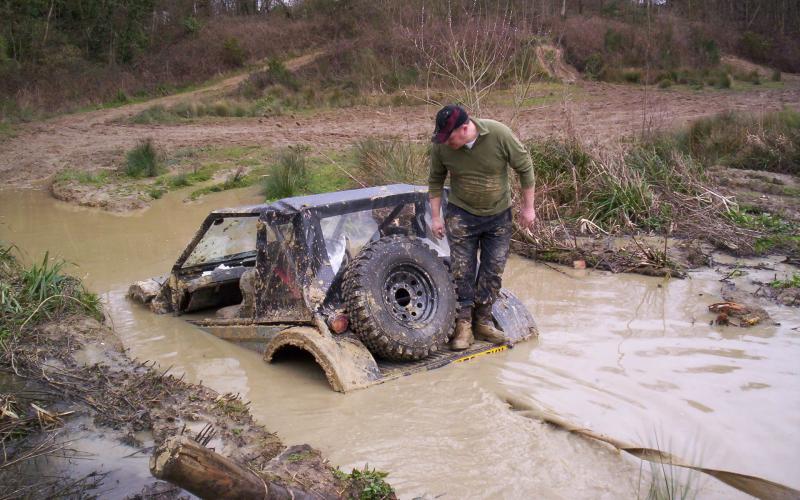 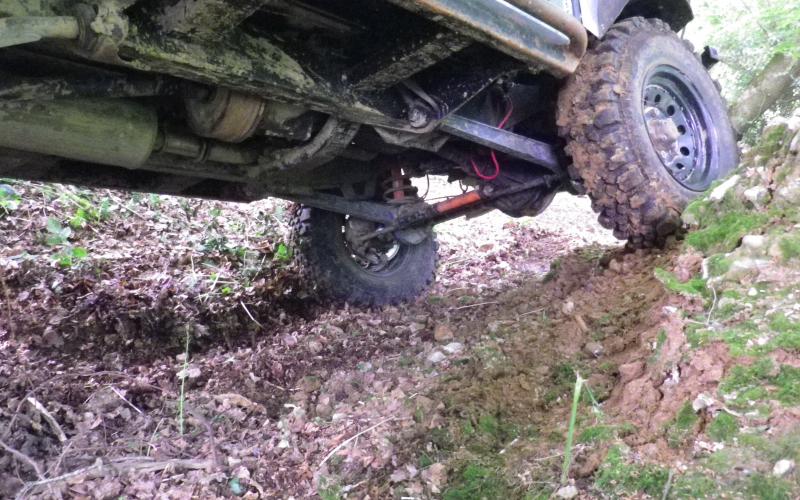 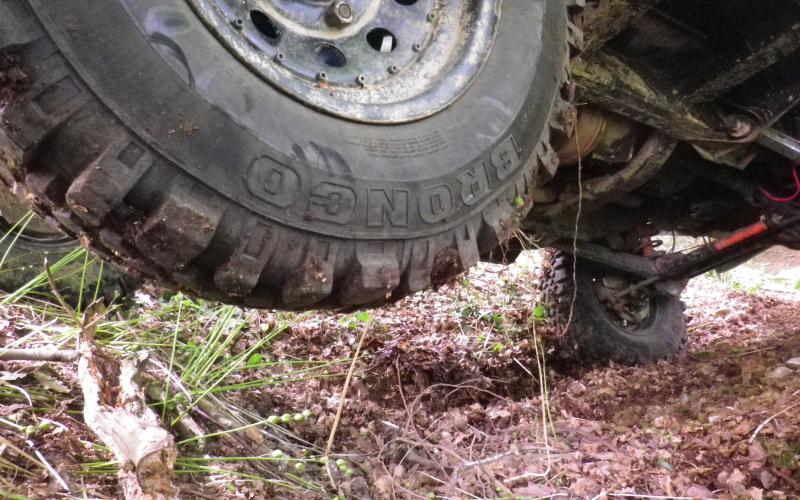 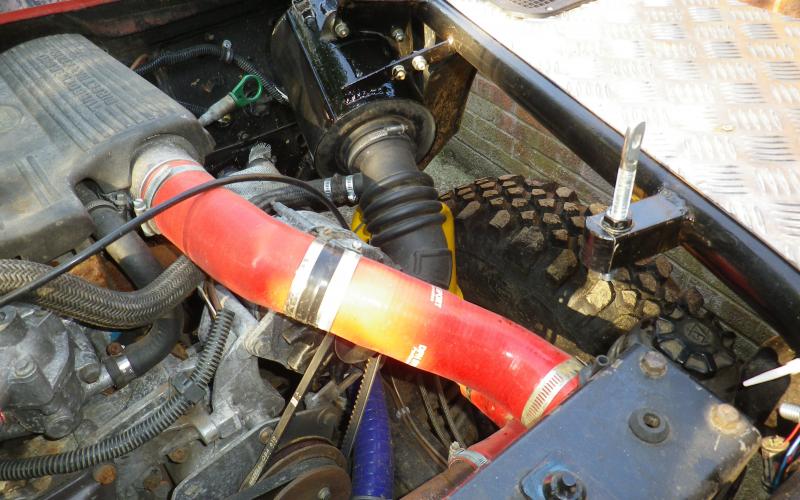 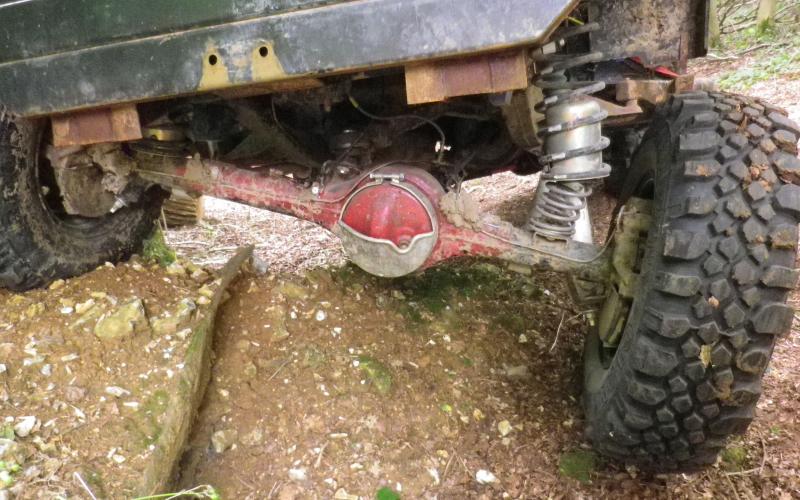 When you’ve already owned one Range Rover that turned out to be a rot box, buying another might seem foolhardy. Not when you’ve got a plan, though, which involves replacing the crumbling body with a kit car body from one of the best-loved exponents of the art. And so Mark Pearcy’s dastardly scheme swung into action: ladies and gentlemen, say hello to Mutley…

‘Man’s best friend.’ You hear that phrase and you know it’s going to be about a dog.

So it’s strange that when someone describes a 4x4 as a ‘dog’, they don’t mean it’s a faithful and loyal servant that wants for little and gives you unswerving, unconditional love in return. They mean it’s rotten, leaky, unreliable and prone to breaking.

But you can’t ride a dog to the top of a mountain pass, and it can’t carry your flask and sandwiches up there on the way (however much it would like to). For that, a 4x4 is much more useful.

Still, it stands to reason that there must be some form of vehicle out there that combines the qualities possessed by both parties. A good truck that’s also a good dog, so to speak. And this brings me to an old children’s TV programme: Wacky Races.

If you’re young like me, you’ll have missed this first time around. But if, like the editor, you’re, well, not young, you’ll remember this Hanna- Barbera masterpiece like it was yesterday. Characters like the Red Max, Peter Perfect, Lazy Luke, the Gruesome Twosome, the Ant Hill Mob, the Slag Brothers and, of course, Penelope Pitstop will be etched on your memory.

But there’s one pair of characters whose names transcend the fame even Wacky Races itself was able to achieve. Dick Dastardly was an archetypal comedy villain in the style of Terry Thomas, and his sidekick was man’s best friend – or worst enemy, in the case of the wonderfully mischievous Muttley.

Which brings us to Mark Pearcy. He doesn’t resemble Dastardly in any obvious way, aside from that he too has an accomplice by the name of Mutley (notice the single ‘T’). In this case, however, his faithful sidekick is in the shape of a Land Rover buggy – and, like the average episode of Wacky Races, it has quite the story behind it.

‘I bought a Series III Lightweight some years ago, which was stolen off my drive,’ says Mark. There was a time when Land Rovers weren’t popular with stinking thieves – it was called ‘before 1948’. Anyway.

‘I then went ahead and replaced it with a two-door Range Rover,’ continues Mark. ‘I should never have bought it, to be honest. The thing was completely rotten.’

Ah yes, the classic Classic rot, as it were. So far then, Mark’s history looks jaded at best, with a stolen vehicle that could now be a restored beauty and an old Rangey that had more holes in it than a golf course.

You might be surprised then to hear that the next Land Rover Mark was involved with was a four-door version of the same model. This, however, was already being scrapped – and this time round, and Mark knew exactly what he was doing.

His plan was simple. The scrapped Rangey would relinquish the parts needed for his ultimate truck – which is what would eventually come to be called Mutley. Enter stage left NCF Motors, makers of kit car bodies which have given a new lease of life to many a tired Range Rover (and Discovery, Vitara and Samurai), and in particular that company’s Traka kit.

This was originally designed for people with an old Rangey whose chassis was solid but whose body was rotten (and that’s a lot of people). The idea was to let them build something usable as a fun toy that didn’t just look like any old Land Rover, but as you can see this particular vehicle does have a Defender-like appearance. That’s because Mark hybridised the NCF kit with a tubular front end from North Off-Road.

‘The idea for this truck came about 12 years ago and it’s been in this incarnation for around the last six,’ Mark tells us. The project is finally drawing to a close, with only the winches and a few extra revisions to make. Think of it as Mutley receiving the last of his grooming and veterinary checks. Claws being trimmed, for example, and teeth sharpened for more bite – not that you could imagine Dastardly ever taking his mutt to a grooming parlour, but you get the idea.

‘At the moment it gets trailered round to numerous play-days,’ says Mark. ‘Simply because for one thing, it’s not road legal, and for another when I go to a play site with it now, it means that nothing is off-limits. The black route is the way to go!’

But that’s changing: this dog is going to get a licence. When we spoke to Mark, he was getting Mutley ready for the IVA test – after which his trusty sidekick will be able to venture away from playday sites a little more and on to the green lanes of Britain.

You may wonder why it has taken the best part of a decade to get the truck to this position. The answer is mainly that Mark is more concerned about relaxing with his project, as opposed to getting all fired up over it and potentially making a catastrophic error in the process.

‘For me, working on the vehicle is therapeutic,’ says Mark. ‘I can come home wound up like anything – but if I spend one hour in the garage, I’ll come out of it a different person.’ How many spanner throwers do you know for whom exactly the opposite is the case?

‘There is no pressure on me, you see,’ continues Mark. ‘All the work I have done has been through curiosity in a way. I’ve more or less single-handedly overseen this entire project. In my day job I prepare laser printers, so I’m quite mechanically driven. And having owned Land Rovers for over 20 years, I’ve had plenty of time to get to know them and figure out what works and what doesn’t.

‘If I’d have sat down at the start of this project and tried to actually process the whole task in my mind, I’d never have got going! Trial and error is the way forward.’

Many would disagree with that last claim, but it certainly works for Mark. All the same, there must have been times when he felt like he was building something dreamt up by Dick Dastardly; all grand plans and hair-brained schemes, but ultimately doomed to fail.

Except of course it wasn’t.

Mark has persevered all the good, solid ingredients of a Range Rover Classic and transformed them into a stripped-back play-mobile – and now he and his wacky accomplice can tackle whatever terrain they fancy. Throughout the whole of the Wacky Races, Dastardly and Muttley never once tasted victory. They would storm into a seemingly unbeatable lead, only to stop and waste time setting traps for their rivals – and cost themselves victory in the process. Every episode would end with Dastardly’s famous ‘Drat! Drat! And double drat!’ followed by Muttley’s even more famous wheezy laugh – but William Hanna and Joseph Barbera never once let them enjoy a moment of triumph.

And that alone is one fundamental difference between Mark Pearcy and the cartoon dog who gave his truck its name. Unlike Dastardly, he’s always taken his time over things. And unlike Muttley, his truck really is a faithful friend.