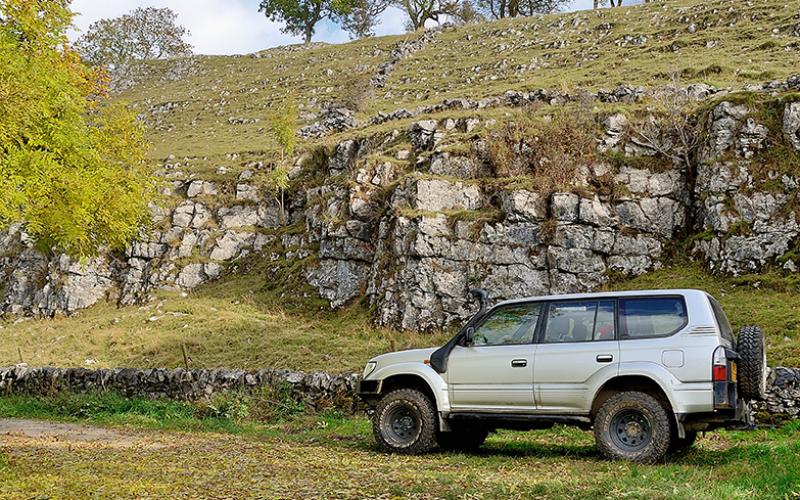 THE PEAK DISTRICT NATIONAL PARK has proposed a permanent TRO on Washgate, a lane straddling the border between Derbyshire and Staffordshire just south of Buxton.

The lane, which is recorded as a public highway by both counties, crosses the River Dove via a historic packhorse bridge whose width makes it unsuitable for 4x4s. As a consequence, common practice for many years was to ford it alongside the bridge.

This came to an end in 2009, when Derbyshire County Council placed obstructions on the right of way to prevent 4x4 access. Based on vehicle logging data quoted by the Peak District National Park, this reduced the number of recreational vehicles using the route to zero - from a 2007 average of approximately four per week.

Trail bikes have still been able to use the lane since then, and indeed it is used as a section of the annual Bemrose and Reliance bike trials. Between 2010 and 2015, vehicle logs show that the average number of motorcycles using the route ranged from 2.3 to 5.7 per day.

Despite the absence of 4x4s from the route for more than half a decade since the obstructions were placed, the Peak District’s proposals for closure says that voluntary codes of conduct have failed to prevent damage to the lane. Ironically, the national park authority also says that signage and obstructions placed to prevent vehicle use are themselves a blight on the landscape.

Washgate is close to a number of valuable ecological sites, including an SSSI, and the authority quotes a litany of damage in its reasons for seeking to make a TRO. Given the tiny numbers of recreational 4x4s using the lane prior to the obstructions going up, however, and the extremely limited amount of use it has received from trail bikes since then, the source of these impacts on the route, its borders, the river, the bridge and local bird life is unclear. As has become the norm in the Peak District, the authority has rejected the possibility of following what motor vehicle users would call best practice in green lane management. Responsible riders and 4x4 drivers are willing to accept restrictions where necessary, as evidenced by the successful operation of permit schemes in Kent and the Lake District and short-season opening in parts of Wales.

On this particular road, however, access is further complicated as a short section on the Staffordshire side of the river is classed as a public footpath. Additionally, no claims for the lane to be recorded as a byway had been submitted prior to the NERC guillotine of 2005.

Before Washgate was obstructed to 4x4s in 2009, we became aware of several incidents of harassment towards motor vehicle users. We were also informed of an incident in which a group in 4x4s was alleged to have dismantled a dry-stone wall bordering the route in order to fill holes in a hairpin bend on the Derbyshire side. In each case, these were criminal offences which could be dealt with by existing legislation had the perpetrators been caught.

Those of us who had the opportunity to drive Washgate prior to 2009 are likely to be the last to enjoy what was a beautiful lane - and could have been a perfect example of intelligent right of way management, particularly as there are other sensitive routes in the area which would benefit from being part of a structured plan to protect responsible use while further outlawing abuse. As it is, however, the consultation period on the planned TRO is open until 22 April.