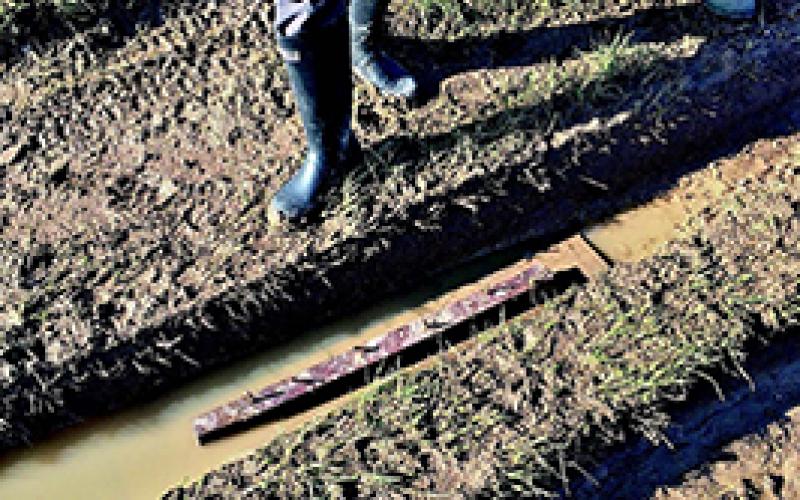 The piece of timber, with nails driven through it, was left on a byway known as Tilshead 6. While the local authority was cautious about jumping to conclusions as to where it came from, lane users were in do doubt that it was a deliberately contrived attempt to damage motor vehicles’ tyres - one which could easily have caused serious injury to walkers or animals using the right of way.

A BYWAY ON SALISBURY PLAIN has become a crime scene, after an improvised spike trap was found in ruts on the trail north of Tilshead. The device, made of wood with nails driven through it, was apparently placed on the track to puncture the tyres of recreational motor vehicles - though it could obviously have caused serious injury to walkers, particularly children, as well as horses and other animals. Believed to have been left on the trail some time in the first half of February, the trap was brought to the attention of Wiltshire County Council – which responded by asserting the rights of 4x4 drivers and trail bike riders to use the lane. Known as Tilshead 6, the byway runs north from the village to join a network of trails on the west side of Westdown Artillery Range.

These trails, and the many others on Salisbury Plain, bring a great deal of motor vehicles into the village - whose petrol station and pub gain significant trade from green laners. Despite this, however, not all residents welcome the presence of motor vehicle users. Writing on Facebook after pictures of the illegal device were circulated by Wiltshire Trail Riders’ Fellowship, one mentioned a recent spate of illegal use and of the village being ‘inundated’ with trail bikers. It’s not known who placed the trap, however the Wilts TRF’s page attracted further comment from every kind of rights of way user - including horse riders who pointed out that in an extreme case, the injuries it would inflict to one of their animals could be fatal.

Commenting on the discovery, Wiltshire County Council said: ‘We do not know the reason why it was left there but were extremely concerned at the potential for injury and damage to anyone using the byway, whether they be walking (with or without dogs) riding, driving or leading a horse, cycling, or riding or driving a mechanically propelled vehicle. All these forms of traffic have a legal right to use this public right of way.’ ‘We deplore any deliberate attempt to obstruct the byway or to endanger anyone using it and request that if this has been done deliberately, the person responsible considers the potential consequences of their actions and does not repeat the offence.’ Sadly, that request is likely to fall on deaf ears.

Another contributor on Facebook claimed that as a former Land Warden on the Plain, he regularly found items such as these - as well as lengths of wire strung between trees, which could cause extremely serious injury to a horse and rider or anyone on a bike, whether powered or not. Though some comments on the incident suggested that anti-4x4 organisations may be to blame, this kind of criminal act should be seen separately to the ongoing debate over motor vehicle use. Every user group, drivers and riders included, will always contain a lunatic fringe - and while there are organisations in the anti-4x4 camp whose lunatic fringe appears to run the show, acts like this are a crime against everyone who takes to the lanes.