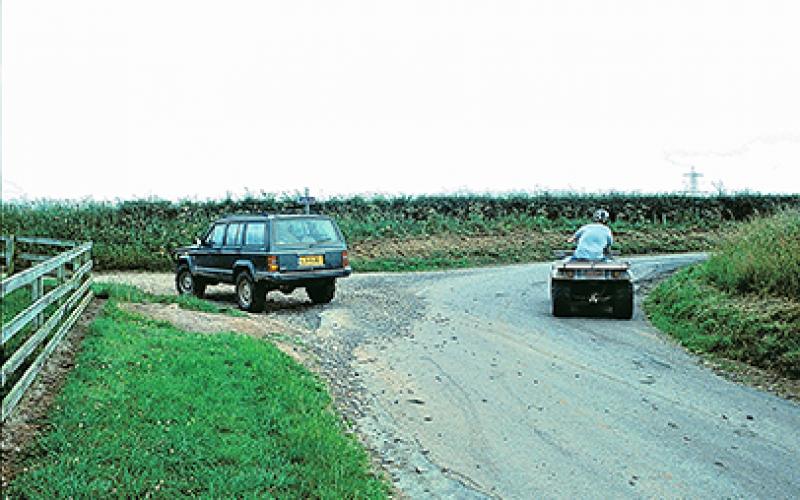 We’ve got some experience of being challenged while laning in the Northumberland area. While driving this unsurfaced road a couple of miles from the disputed route, we were stopped by a farm hand and told in no uncertain terms that it was only for cyclists and horse riders. It is, however, recorded as a UCR by Northumberland County Council – as is the lane in Chatton which the authority believes should become a Byway Open to All Traffic

Northumberland County Council has been warned of possible legal action by the Duke of Northumberland if it presses ahead with plans to create a Byway Open to All Traffic on his land.

The proposed byway, one of a number of rights of way whose status the council is aiming to formalise, currently exists as an unclassified county road between Chatton and Amerside Law, near Wooler. Its status was raised during a general review of access in the region, and following the usual investigations the council believes it has established sufficient evidence that public vehicular rights do exist – compelling it to seek byway status.

In submissions to the council during consultations on this and two other proposed (non-vehicular) rights of way over its land, the Duke’s business operation, Northumberland Estates, expressly warned that it would take legal advice were the process to go ahead. Describing the proposals as ‘highly inappropriate,’ it argued that sufficient public access to its land already exists – this includes a substantial amount of permissive access, which needless to say is limited to walkers and cyclists.

The council’s report on the proposed byway, which was submitted to committee on 6 May, quotes two letters sent by Northumberland Estates during the consultation process. These concentrate on what the Duke’s business sees as the practicalities of access rather than the legalities of the rights of way system.

‘The estate is of the opinion that no rights of access additional to those that we have already granted do exist. Furthermore we would be extremely disappointed if any additional rights of way were to be created and quite clearly routes have not been utilised.

‘I would think it highly inappropriate that any additional rights of access were created… We would wish to have the full right of objection and have the opportunity to discuss all issues with every user that the estate have given consent to in order to prevent any additional access being created.’

In its second letter, received by the council the following month, Northumberland Estates says: ‘Some of the areas are completely inaccessible and would not be able to be passable. It would be inappropriate to enable a route to be reopened or created causing detriment to the environment and sensitive wildlife in some of the locations suggested.’

Arguments around environment and wildlife issues sound peculiar in the context of this particular byway as it is currently an access road to a farm for the whole of its length. Northumberland County Council has received representations from other third parties arguing that the route should not become a byway as it is simply a dead end leading from a B-road to the farmhouse – however the British Horse Society (not always the most obvious of allies to 4x4 users, though this case shows the level of vulnerability we share in rights of way matters) notes that it links up with another alleged byway which, if proven, would create a viable through route.

These local issues aside, a legal challenge from the Duke’s business could threaten to create a dangerous precedent, and the Green Lane Association is monitoring the situation with care. Northumberland County Council confirmed to us that at the time of writing, the byway claim was continuing to make progress, but would make no further comment as to whether it had received any further interventions from Northumberland Estates.