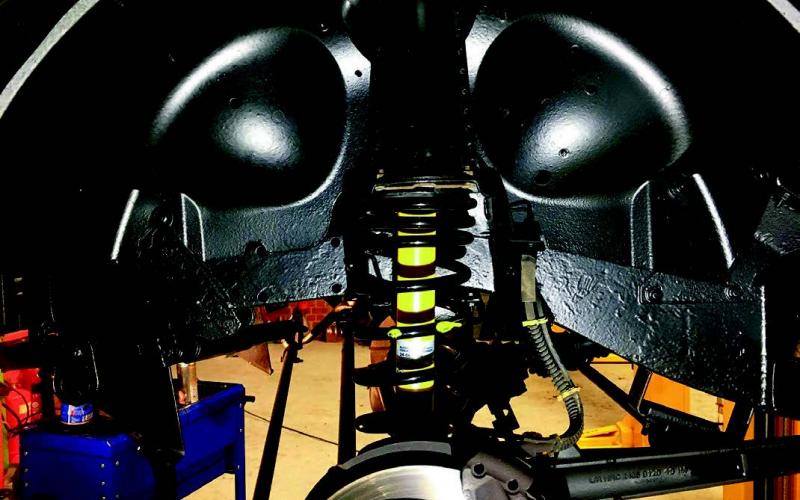 YOU COULD ARGUE that calling your product WAR is a touch misleading. And you’d be right, because it stands for Wheel Arch Refinement and that’s the least of what’s on offer here. Developed by Buzzweld, WAR will do a lot more than refine your wheelarches. Assuming they need refining. Are they perhaps a trifle vulgar at the moment? Do they seem a bit common to you? Assuming you feel your 4x4 needs a bit of a pick-me-up, then this stuff will really make things better and for a long period too.

Basically what you are doing is covering the underside of your vehicle with a rather clever protective wax/underseal. The exact composition has been the subject of constant refinement (that word again), until you now have a material that is easy to apply – you just spray it on. The black waxy substance then sticks like, well, something that sticks very effectively indeed. It wets out well, so it expels moisture, bonds directly to existing rust and generally stops corrosion getting any worse while it’s there. And it will be there for a long time as it can self-heal, won’t absorb dirt or road salt and can resist even pressure-washing, chemicals and assorted debris.

It sounds like we’re about to hear that it can withstand zombie attacks, nuclear blasts and asteroid strikes, but the bad news is that there’s no mention of either thing. It does however stay flexible, so it won’t crack off even if the temperature drops. Frankly, it sounds like just the sort of thing the average driver could do with being coated in, particularly during the winter months. After all, who needs moisturiser anyway?

It sticks to aluminium, stainless steel, plastics and even rubber rather better than it adheres to human skin, however. So perhaps go to WAR on your off-roader, not on yourself.  The good stuff is sold in either 400ml or 2500ml can sizes, and you can find it by visiting www.buzzweld.co.uk.